Governments across the single currency bloc are pushing the banks, pension funds and insurance firms that hold Greek sovereign debt to play a role in a second rescue package for the heavily indebted euro zone nation. Josef Ackermann cautioned against any steps that could spread the crisis to other vulnerable countries in the 12-year old currency bloc.

"If it is Greece alone, that's already big. But if other countries are drawn in through contagion, it could be bigger than Lehman," the Deutsche Bank chief said at a Reuters banking event on Monday.

The Swiss banker, who is also chairman of the Institute of International Finance, an international bank lobbying group set up to deal with international debt crisis, cautioned politicians against rushing a deal with the private sector.

But how does all that rate against this where leading economist Stefan Homburg tells Der Spiegel that ANY EU bank involvement in sovereign bailout – voluntary or otherwise – would be illegal?

(EU) Banks cannot participate (even) voluntarily. An executive board is committed to its company’s welfare, and not the public interest. If it waives outstanding debts at the expense of its own company, this is a breach of trust and punishable by law ... 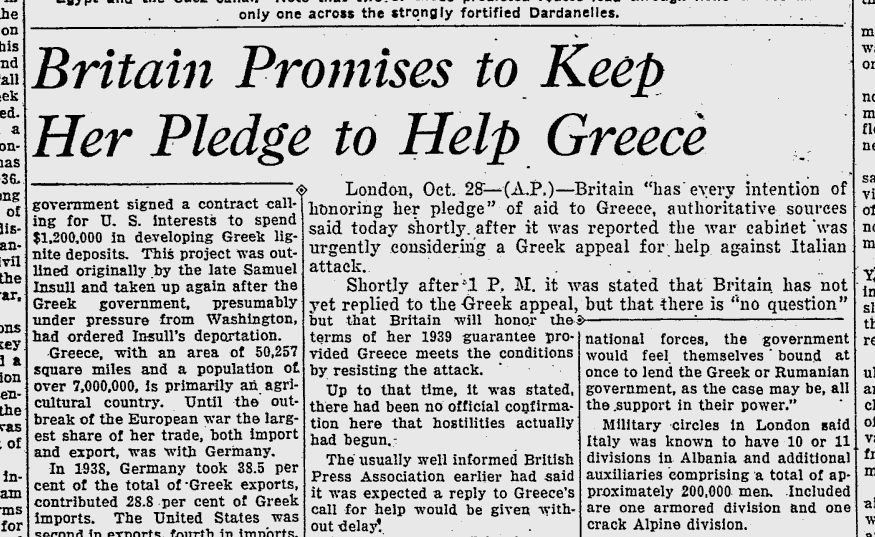 Never mind, though, the British are rushing to help, as per the headline above. But then that was October 1940, after the Italians had invaded Greece. Chamberlain had given a guarantee on 13 April 1939. We were back again in December 1944, staving off a civil war.

And now ... we're back again, pouring extra billions into propping up the Greek economy "by the back door" through a massively increased contribution to the International Monetary Fund. The irony is, of course, that we're having to borrow the money to do it ... just like 1940 and 1944.