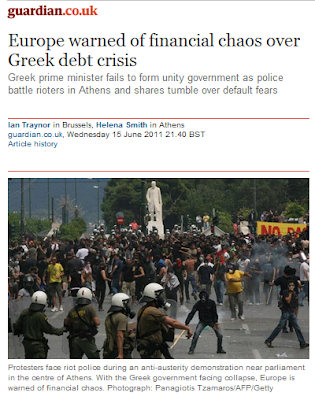 Much as one loathes The Guardian, one also has to concede that it occasionally acts like a proper newspaper, displaying intelligent, adult news values. This morning is such an occasion for, as the rest of the MSM plays, it leads on the Greek crisis.

The point about Greece, of course, is that it is not a faraway country of which we know little, but a member of the European Union.

Its ruling élites are part of our supreme government and, although the UK is not a member of the single currency, we are part of the same international financial system, and responsible – through the IMF and other institutions – for maintaining the financial integrity of the nation.

Thus, when the Greek government is on the brink of collapse, its economy in tatters, with pitched battles on its streets and world stocks tumbling as EU leaders squabbled over whether and how to launch a second bailout, this is actually news – important news.

From early yesterday, when the players were just warming up, George Papandreou, the prime minister – who likes to be called a socialist – seems to have offered to dissolve his government and form a national unity coalition.

However, even in this endeavour he has so far failed, not having managed to persuade the opposition conservatives to join him. Thus, battle recommences today, with Papandreou setting out form a new government and ask for a vote of confidence.

The opposition, however, is calling for Papandreou's resignation and a renegotiation of the bailout terms with the EU, the European Central Bank and the International Monetary Fund as the price for its assent to a national coalition.

And all that is against the background of riot police smacking into tens of thousands of demonstrators in the capital who are protesting against the radical austerity measures being imposed in an attempt to convince the "colleagues" that they should throw more money down the drain.

What is extremely heartening to hear from The Guardian is that a "sense of siege" has descended on Brussels as the Greek drama appeared to be heading towards a denouement. The ECB warned that a Greek default could spark "contagion" across Europe, causing Greek banks to implode and inflicting major damage on the big banks in France and Germany.

"It looks like a week of chaos," said a European official in Brussels. The bailout experiment for Greece has failed. Ireland and Portugal have since also needed to be rescued from national insolvency.

"The euro area faces a very challenging situation that comes mostly from the interconnection of the sovereign debt crisis and the situation of the banking sector", the ECB says. "Greece could have a contagion effect," adds Vitor Constancio, an ECB vice-president.

The whole thing now has perhaps a month to run, before the Greek economy implodes, and the euro starts to slide inexorably into the abyss – although the parallel is perhaps more like a black hole. Once you are in the gravity field, there is no escape.

As the crisis pans out, there is not going to be a single person in Europe unaffected by it, with the distinct possibility that it precipitates a depression as bad as, or worse than the 1920-30s, triggering multiple government collapses and dangerous instability. And we all know where that led.

This, therefore, is a story that is going to run and run, and if there was a residue of adult news values in the MSM, this would be an issue, as in the day's Guardian, that would rarely be off the front pages.