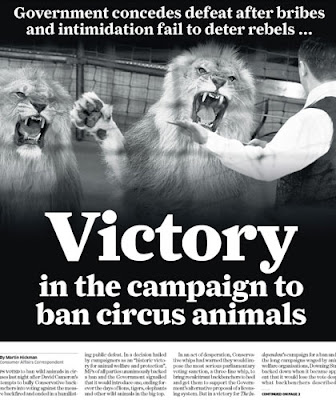 The circus elephant in the room is still at large as the media continue to chew over the bones. Claiming ownership of the campaign to ban the use of wild animals in circuses is The Sunday Express which directs its ire at Cameron for the failure of the government to implement a ban.

It cites a Friday statement which said he was "minded" to outlaw using wild animals but the Department for Food and Rural Affairs, which instead wants a licensing regime, still insists there are "unavoidable legal difficulties" surrounding a possible legal challenge by circus bosses in the European courts. And that's as good as it gets.

Yesterday, The Independent (devoting its front page to the story - pictured) had much the same thing, also reporting Cameron as insisting that he was "minded" to outlaw circuses from keeping wild animals.

According to this newspaper though, Cameron says it is "not right" to still have lions, tigers and elephants performing in the big top. "We are minded to have a ban, but need to clear some obstacles," he told a press conference at an EU "summit" in Brussels.

Nevertheless, says The Independent, "despite Mr Cameron's conciliatory language on implementing a ban – and the promise by Agriculture minister James Paice to 'respect the will of the House' – there were signs last night the Government was prevaricating".

We are then told that the Department for the Environment is understood to be still arguing there are "legal problems" in implementing an outright ban and to be standing by its alternative proposal for a tough licensing regime for circuses.

Now, as our readers are very well aware, these "legal problems" are a matter of EU law, with the government convinced that to implement a ban would be contrary to EU law.

It really cannot be the case that the writer of The Independent piece was unaware of this – at least, one hopes so – in which case the refusal to identify the EU as the cause of the problem is more than a little interesting. This Europhile newspaper has been leading the fray in the media for the adoption of the ban, and it must be acutely embarrassing that its darling EU is blocking the way.

But this inability to report the elephant is not unique to the Europhiles. Even the self-proclaimed sceptic Daily Express was reporting yesterday that "Ministers were against introducing a ban next year, fearing it would attract lawsuits from circus owners and workers".

This paper thus did not mention the EU in its story, taking exactly the same line as the idiot Andrew Pierce in The Daily Mail, which told its readers, "Ministers opposed a ban because of fears that it would leave the Government open to lawsuits from circus owners and workers".

Exactly the same formula was seen in The Scotsman though. It seems that copy-and paste journalism is rampant – as always. 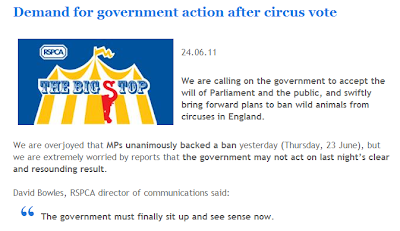 But it is not only the media which is ignoring the EU circus elephant. The RSPCA on its website is demanding action, with David Bowles, director of communications, saying: "Parliament has spoken, and government should listen". Any attempt to delay or avoid a complete ban would be wrong-headed and simply not acceptable, he says, with not a single mention of the EU.

Part of this, undoubtedly, is the insistence on trivialising politics, reducing it to the level of a low-grade soap opera, as does this piece in The Mail on Sunday.

The media and political classes have become so debauched that all they can think and write about is "self". The actual issues are of such little interest that they cannot be bothered to research them properly, much less report them accurately.

That said, I take some flak on the forum for attacking Pritchard - a potential ally. My view, though, it MPs wrote themselves out of the script a long time ago, Pritchard along with the rest, who is at heart just a vain egocentric like the rest - incapable of listening or learning, still denying EU involvement.

Demonstrated with the utmost clarity by this affair is the very simple premise – if we are going to force any changes to the way this country is governed, we are going to have to do it ourselves. We cannot rely on parliament or the media.