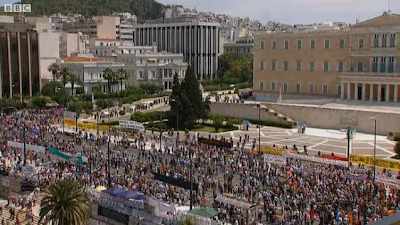 It is getting as predictable as that, with the first day of a 48-hour general strike in progress – the fourth this year - and crowds converging on Syntagma Square, where parliament will vote on sweeping spending cuts.

"We don't want your money Europe," Iamando, 36, told the agency, AFP, on the square with police already out in force at 6 pm "Leave us alone - please, please, please," she cried.

Initially, as pictured, the inevitable march past parliament looked pretty orderly, with the situation well-contained by the police. Later reports though have riot police firing tear gas at youths hurling rocks near the finance ministry – the scene of earlier disruption.

We are also told that hooded youths ripped up paving stones and set trash bins on fire in central Athens as police gave chase and fired tear gas and stun (sic) grenades.

Meanwhile, it seems that the French are cobbling together a rollover deal – giving Greece a 30-year repayment holiday, enough perhaps to be able to park the crisis, or perhaps not. There is much talk of "voluntary" participation" by the banks, which seems about a voluntary as someone jumping out of a window when their house is on fire.

Within all this, though, there seems to be a change in tone, which may or may not be significant (below). 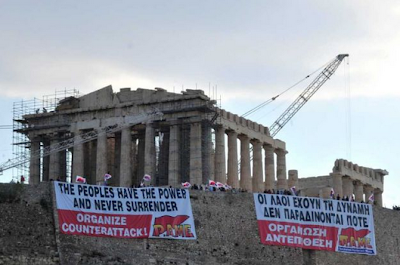 Protesters of a communist party-backed union, PAME, are hanging banners in English and Greek reading: "The peoples have the power and never surrender. Organize counterattack" in front of the Parthenon temple on the Acropolis. This rhetoric is more strident than we have seen before – albeit that reporting is poor and that is most certainly distorting perceptions.

Zerohedge, however, has live streaming (and here),where copious and frequent use of tear gas could be seen, while the blog itself notes a "far more violent tone".

Whether this is a last hurrah, while the "colleagues" do deals in les couloirs, is anybody's guess. But, for the moment, we can confidently report that Syntagma Square is not the place for you if you are after a quiet picnic.