The great task of referencing the book is proceeding apace, but very slowly – far slower than anticipated, hence the slow pace of blogging (that and the fact that the world seems to have gone barking mad).

Anyhow, I've added about 300 references so far – which brought me to early August, when there was a controversy running about fake photographs of shot-down German aircraft. Nothing is new – and that was pre-photoshop.

At the same time, there increasing scepticism about the accuracy of the RAF claims for German aircraft shot down – and rightly so, as they were more than double the actual figures. This led to a tart response from the Air Ministry.

After an air battle, it asserted: "RAF crews engaged made reports which are carefully compiled, together with pictures taken by the camera gun carried on every British fighter". This "gun", it was claimed, registered a picture with every burst of machine-gun fire, and also recorded the time.

This, actually, was an outright lie. Cameras were available, but they were by no means fitted to all RAF fighters, an issue I addressed on the Days of Glory blog. In fact, they did not come into general use before September 1940, and then most often as training aids.

Needing a reference (or several) to support my contentions, I started hunting on the internet and came up with the video (above) from the Imperial War Museum. It is rather self-explanatory – gun camera shots ... from cameras set to take pics mainly when the guns are firing. 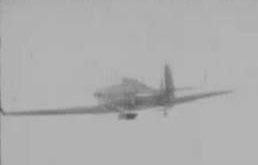 Taken in late September 1940, all is well until we get to Sgt Feary's efforts. He is flying a Spitfire Mk 1 from No. 609 Sqn, reported as taking a pop at a Heimkel 111 (looks more like a Dornier to me). Then, 1:40 in the film, another aircraft flies into the frame ... screen shot to the right (cleaned up and rotated). Unless I am very much mistaken – and I am not – that is an RAF Hurricane.

Reviewing the whole clip, it is hard to see any evidence of aircraft actually being shot down, which possibly explains why (together with "shooting" at Hurricanes) so little camera footage was actually published at the time (I can find only two shots). The essence of the evidence, however, is that the Ministry was lying about the figures, and knew it was – and was then lying in order to cover up.

Writing this book has been something of an education for me, charting the extent to which the government quite unnecessarily lied to its own people – to the extent that more people, for a while, ended up listening to German radio for their news than listened to the BBC.

Of course, this is nothing new, and nor even a new discovery. Writing The Great Deception, Booker and I saw the extent to which governments and politicians lied their way into the EEC and beyond. And, of course, writing the blog means I confront this virtually every day.

Governments lie, and bears pay lavatorial visits to wooded areas, you might say. But then you find people who say they "never believe what they read in the newspapers" and then trot out one or other of the latest stories as if it was gospel. Contrary to what they actually say, the default mode for most people is to trust government and believe what they are told.

We have a long way to go before the majority of people switch modes and take distrust of government as the standard, so we have an ongoing education process. Thus jaded and depressed, I've had a look at the news tonight, and for once I can't bring myself to comment on it. I'm going to have an early night and pick up in the morning, when I can be my usual happy self.