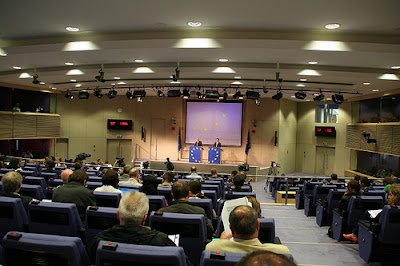 The Boy may be enjoying the media spotlight in Brussels today, but behind the scenes – according to Hürriyet Daily News, all is not well with the press corps. Brussels is falling out of fashion and the number of foreign journalists in the city has declined by 25 percent in just one year, from 1,200 to about 900.

There are two reasons given for this "escape from Brussels" - the diminishing role of the EU in international politics, as reflected in the recent Arab spring, and the debt crisis that continues to ravage the eurozone, forcing many European media companies to cut costs.

"Most mainstream media organizations do not have foreign correspondents in Brussels anymore", said Marc Gruger, the director of European Federation of Journalists. Media institutions in Germany, France and the Netherlands have already cut the number of reporters in Brussels significantly, in part deterred by the costs.

Employers have to pay monthly nearly €4,000 per reporter, in addition to renting an apartment in central Brussels. The local tax system obliged companies based abroad to pay Belgium for their reporters does not help, either. This tax is around half of the €4,000 euros.

However, it is Demir Murat Seyrek, a managing partner of Brussels-based Global Communications, who put his finger on an interesting trend which has become all too evident. "Copy-paste journalism has paved the way for the press corps to leave the city, he says, adding that: "Many foreign reporters rely on press releases from EU institutions, with not much added value in terms of journalism".

So there is the guilty secret – not that it is much of a secret, but it is one that allows TM News, a major Italian news agency, to employ only one journalist instead of the previous four in Brussels.

The survivor, Lorenzo Consoli, also a former president of the International Press Association, says that many editors think there is "no use in being in Brussels anymore. The EU seems weak and slow in decision-making most of the time". Consoli cites the Libya crisis, charging that Brussels was "completely non-existent", except for humanitarian support.

"Journalists have given up [on Brussels] due to fruitless long discussions and meetings. The lack of leadership and hesitations … has resulted in a decline in interest toward the EU - not only among journalists, but for everyone", Consoli concludes.

Jean Lemaitre, director of the Brussels-based Institut des Hautes Etudes des Communications Sociales, reminds us that many reporters from Eastern Europe came to Brussels to cover what was going on in the EU after enlargement in 2004.

"People in those countries were full of hope after accession. Nowadays, after the economic crisis, a kind of disenchantment has replaced euphoria. This disenchantment was clearly visible when many Brussels-based journalists went back home", he said.

That, of course, leaves them with the situation with which we are increasingly familiar, where we have long been used to a London-centric, self-obsessed media, concerned mainly with trivia, personalities and the doings of the slebs, while our supreme government continues to run our affairs unchallenged.