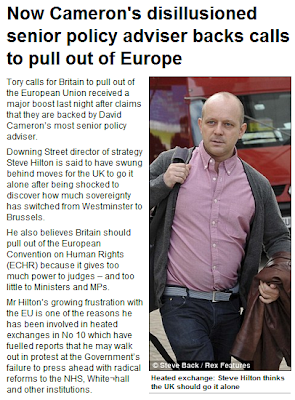 I've never really gone with this Luke 15-7 stuff. Why should the "repentant sinner" get all the glory, when the ninety-nine "righteous men" got it right first time?

So it is with the applause for the new "hero" on the street, the wandering fool otherwise known as Steve Hilton who, according to The Mail, is now backing Tory calls for Britain to pull out of the European Union.

The Downing Street "director of strategy" is said to have swung behind moves for the UK to go it alone after "being shocked to discover how much sovereignty has switched from Westminster to Brussels".

We also learn that his "growing frustration" with the EU is one of the reasons he has been involved in heated exchanges in No 10 which have fuelled reports that he may walk out in protest at the government's failure to press ahead with radical reforms to the NHS, Whitehall and other institutions.

Here, one really does have to ask what sort of a "director of strategy" for a political party is "shocked" by the degree of penetration by the EU into the affairs of the UK. If he wasn't already aware of that, then he's been taking money under false pretences.

But there is an interesting point here. We often assume that the bubble-dwellers are pushing the EU agenda knowingly, with malice of forethought. It is difficult to appreciate quite how pig-ignorant these people really are. Now, though, we have what appears to be a graphic confirmation – the idiot child is "shocked" after finding out something he should already have known.

Before we get over-excited about this "repentant sinner" therefore, one needs to step back and look at what the Hilton is said to be shocked about – namely "how much sovereignty has switched from Westminster to Brussels". Now, thirty-five years ago, we would have rejoiced in such a convert to the cause. More than three decades on, though, the thinking and understanding has moved on.

On that basis, no more can a British government pull out of the EU than can Cameron extract his brain from his own cranium, assuming that is where he keeps it. The EU and the UK government are one and the same, indivisible parts of the one. The issue therefore – as we have long recognised – is no longer that we should seek to withdraw from the EU. We can no longer do this. One might say, you can take Britain out of the EU, but you cannot take the EU out of Britain.

Thus, the real objective is one of regime change. We have to take down the current government, revisit the constitutional settlement and rebuild an entirely new one. And yes, we are talking revolution. The only question is whether it is going to be peaceful or violent. But it is going to happen - simply because it has to.

Little dimwits like Hilton, though, are so far behind the curve that they are not even in the game. From his position at the centre of the bubble, doubtless he feels he is "the man", but he knows nothing. And that is why, whenever there is fundamental change in progress, it comes from outside. The bubble-dwellers will be the last to know. Give Hilton another thirty-five years, and he might just have caught up. But, by then, the game will be over.

He and his likes won't even have seen it coming.