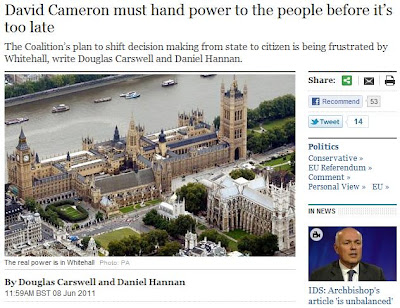 Yesterday, we saw Blair and Williams addressing the issue of power – each with their own views of how to correct acknowledged imbalances. Today, we see Carswell and Hannan, two Uncle Tom Tories, address the same issue, with like effect – absolutely none.

The Hannan has been particularly vocal of late about what he calls "localism", but then as now achieves nothing but to display his almost total lack of understanding of the dynamics of power, and how political change is achieved.

That much is reflected in their headline, "David Cameron must hand power to the people before it's too late", which for once adequately conveys the thrust of their piece, amplified by their complaints that: "The Coalition's plan to shift decision making from state to citizen is being frustrated by Whitehall".

"Whitehall" (including the branch office of Brussels) is, of course, where the power resides – the heart of government. And it is an unalterable truth that no government - of any shape or colour - ever surrendered power voluntarily. If people want more power (and know how to use it), then they are going to have to get off their backsides and take it.

The music hall duo, Carswell & Hannan, should know this. If they do, then they must know that their proposals have absolutely no chance of success and they are playing games. If they don't, then they are simply two, stupid, idle politicians, with a different line of chat.

Either way, these two Uncle Tom Tories have little understanding of the dynamics of power. They are not going to rock the boat and, if is left to them, they will be collecting their generous pensions without there having been the slightest change of any significance. You need to have an eye to history to see that any serious change comes from outside the circle of power, not from within.

And therein lies our problem. While there is dissatisfaction and grumbling, nothing has yet coalesced into a coherent political movement which will seriously challenge the status quo. That movement, when it comes, is going to emerge from outside the gilded circle of power, and will owe nothing to the likes of Carswell or Hannan, whose role – if anything – is to head off meaningful change.

But in one respect, the headline is right. Cameron needs to act before it is too late – not to hand down power, but to give the appearance of so doing (which is what the Dynamic Duo are proposing), and thus pre-empt the emergence of a movement that will demand a real transfer.

Cameron, though, does not have the political brain or the acumen to understand what is going on – any more than Carswell & Hannan. This means that they are making more profound change inevitable, which is what is really needed anyway. To that extent, the more they prattle, the more likely it is that something will eventually happen. For that, I suppose, we should be grateful.