"Europe needs an elected president with a democratic mandate to drive sweeping reforms and give the European Union leadership on the world stage", says Tony Blair to the paywall Times.

The assumption that an elected office is "democratic" and confers a mandate is one of those schoolboy howlers which only LSE graduates should be making. But then Blair always did have a limited grasp of reality ... and now he is proving just how limited. 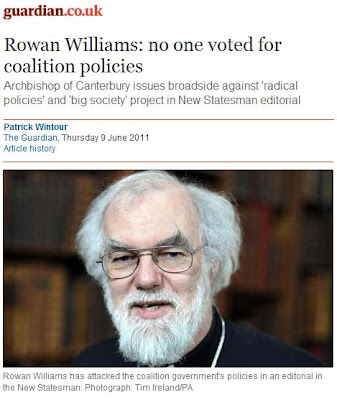 On the other hand, this idiot has a point, complaining that the Cleggerons are forcing through "radical policies for which no one voted". Euroslime Dave and his not so merry men do not have a mandate, neither of the parties represented by the coalition having achieved a majority - with both parties having gone back on pledges made in order to secure their election.

This makes for an interesting contrast - but one which gets to the heart of the current inadequacy of our constitutional system. So much energy and effort is focused on choosing who elects us - with Blair falling into the trap of believing that this is what matters - while Williams puts his finger on deeper problem. We have a limited control over whom we chose for office but, once in office, we have no control over what they do.

Therein, if I may say so, lies the need for and the justification of Referism. The demos needs to elect its representatives - but that is not enough. Through the span of their office, we need an ongoing mechanism, in order to control them. Relying on politicians' promises, as we all know, is not good enough, it is too late to vote them out of office after the damage has been done, and the election itself is not that much use when the different parties come up with roughly the same bill of goods.

Bizarrely, I never thought anyone would ever find a use for Williams, but I suppose even idiots occasionally stumble on a greater truth.