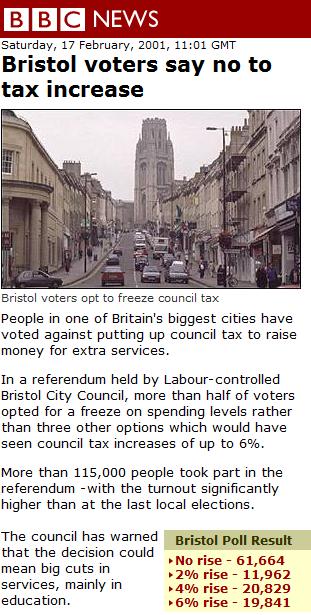 From the school of nothing new under the sun, a reader points out that, in February 2001, Labour-controlled Bristol City Council held a referendum on its Council Tax, asking voters whether they preferred to increase it by two, four or six percent, or to freeze it at then current levels.

Much to the chagrin of the Council, which had expected otherwise, more than half of the voters opted for a freeze. Sentiment was such that, had a reduction been on offer, the indications are that this would have been the preferred choice.

Nor was Bristol on its own. The Council was just beaten to the punch by the London Borough of Croydon, which on 14 February 2001 asked its 235,000 registered electors to decide whether Council Tax should be increased by two percent (in real terms, an effective freeze), 3.5 percent, or five percent. Council tenants also voted on whether their rents should be increased.

Again to the chagrin of the Council, 56 percent of the voters opted for the lowest possible rise in Council Tax. A total of 80,383 voted, a 34.2 percent turnout. Thirty-two percent voted for the 3.5 percent increase and a mere five percent went for the five percent hike.

Of the 4,190 council tenants responding to the rents referendum (24.1 percent turnout), just over 58 percent voted for a rent freeze, keeping average rents at £65 a week. On offer to the tenants had been a community patrol service, community grants, money advice and debt counselling services – all of which were rejected.

Croydon was to repeat the experiment the following year, with 74 percent of the taxpayers who voted opting for the lowest rise on offer, at 3.65 percent, on a 35 percent turnout. The BBC observed, at the time, that the referendums suggested that Tony Blair "may have his work cut out to persuade the public to pay more for a better NHS". Of course, the voters were not asked. 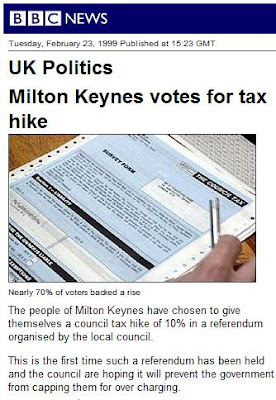 Interestingly, this experiment in direct democracy had started in 1999, when Milton Keynes had put to its voters the choice of three levels of increase, ranging from five percent, 9.8 percent and 15 percent.

Council leader Kevin Wilson told the BBC he was "delighted" by the result. "The referendum gave the people an opportunity to be masters rather than servants," he added, declaring that the referendum had succeeded in its aim of reconnecting people with local government and gave public backing for council tax rises.

Buoyed by the result the following year, Bristol announced that the public would get a chance to vote on their council tax levels, "under plans drawn up to tackle voter apathy". The scheme had the backing of government ministers and, if the public had responded "positively", the plan was to repeat referendums across the country. Clearly, the response was not "positive" enough.

At the time, The Independent was to lament that, "in a victory for the maxim that people vote with their wallets, the results showed few people in favour of extra spending". "Voters of Bristol pick school cuts over taxes", it headlined. The Bristol experiment was not repeated by Labour.

What the experiments showed, however, was that there was some enthusiasm for voting on budgets – even though there seemed to have been very limited local and national media exposure. And in Croydon, voters were not deterred by votes in successive years - turnout increasing marginally on the second year.

The experiments also showed that the electorates were quite capable of dealing with multi-choice votes, a capability which gives much more flexibility than having to stick to a straight "yes-no" vote. Furthermore, there seems to be a willingness amongst the voters to block expenditure. Thus, fears that the electorate will necessarily vote for more spending might be overblown.

With the Labour defeat in the last election, though, the issue is being revisited by the Tories – but in a highly distorted fashion. As of July last year Communities Secretary Eric Pickles has declared that by 2012, he wants people to be able to reject Council Tax levels "if they exceed a ceiling agreed annually by MPs", by voting on them in referendums. 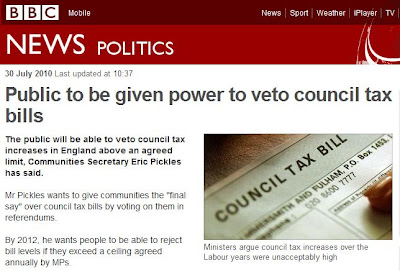 This is based on a promise made in 2007. Pickles calls the plan a "radical extension of direct democracy". It is not. Instead, it is a considerably watered-down version of the earlier referendums – which themselves did not allow for an outright veto. And, needless to say, there is absolutely no suggestion that referendums should apply to central government spending.

Pickles tells us that he is "in favour of local people making local decisions", and also says he wants to reverse "the presumption" that central government knows best when it comes to deciding local priorities. He also wants to make councils more accountable to their constituents for their budgetary planning.

"Let the people decide", he goes on to say – a sentiment with which we agree. But, with Referism, we want to go much further than Pickles and reverse "the presumption" that central government knows best when it comes to deciding national priorities. We are in favour of national people making national decisions.

The Tory plan, therefore, is not anything like enough. To be really in control, the voters must have the power to force down budgets, with the ultimate power of veto if the government does not come into line. A weak as ditchwater block on a preset level of increase is merely a sop, and does nothing the redress the balance of power.

As for costs of the referendums, the Bristol events cost £120,000 each, while Milton Keynes estimated £150,000. Tower Hamlets Council has estimated that a standalone referendum might cost up to £250,000 but, if combined with council elections, the additional cost is estimated at around £70,000. Translated nationally, the total cost of a referendum would be between £30-60 million. For taming the monster, this would be a price worth paying.