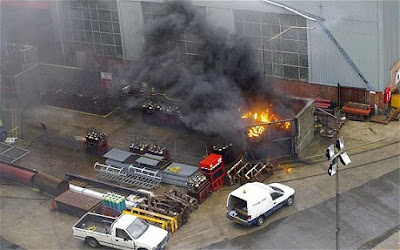 One of the first events of the Battle of Britain in July 1940 was the bombing of Falmouth Harbour, where two Ju-88s sunk the British tanker Tascalusa and set on fire the 6,000-ton Greek steamer SS Marie Chandris.

In what must feel uncannily like déjà vu, the Failygraph is now reporting explosions in Falmouth Docks (pictured above) as around 40 firefighters tackle a large fire, thought to involve acetylene cylinders.

Back in 1940, during the first fire of Falmouth, another British tanker, the British Chancellor was hit and badly damaged. The Dutch salvage tug Zwarte Zee was damaged by splinters from the blast and later sank. The wharf caught fire and dozens of men had to be rescued by launches and tugs. It was a desperate, frantic endeavour which saved them.

Interesting it is that the second fire of Falmouth should get prompt attention from the Fourth Estate, as the first was kept out of the newspapers by the censor. But, when it comes to existential threats, self-censorship rules the waves. Fires may make good headlines but this one will not threaten Falmouth's existence.

What will finally do what Hitler's Luftwaffe failed to do is the EU's Habitat Directive. As Booker reported in December 2004, and again in January 2005, local deposits of the dead remains of maerl, or calcified seaweed, are present in the harbour, and they are now blocking much needed dock extensions.

Like the 40s episode, this ongoing sage has made the local press, but is being largely ignored by the London media. Fires and other easy issues, the London-centric MSM can handle.

The stuff like how the EU is closing down the industry of our nation is a little more difficult. Until recently, it did not get a look in, although a few months ago The Mail thought the Falmouth story would make a good "quickie" and ran a fairly decent story. Since then, nothing – even though the fight goes on.

Perhaps if, all those years ago the Luftwaffe had done a better job, we wouldn't now need the newspapers to report on the second attempt to close down the docks (and the rest of our industry). But since they seem not much better at reporting the news now than they were 70 years ago – if for very different reasons – when the docks are finally closed down by the EU, we may never get to know.