The epitome of ignorance 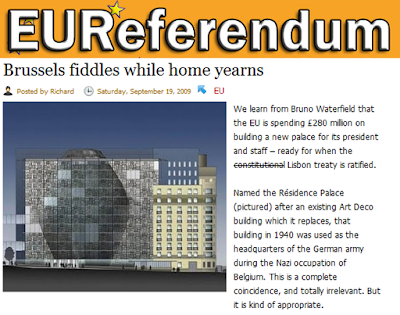 The Guardian steps up to the plate to tell us that the Darling Boy seized on an opportunity to voice "immense frustration" at the lavish spending of the Brussels élite after being handed a glossy brochure promoting the European council's soon to be finished €300m (£270m) headquarters.

The brochure was distributed to EU leaders as they sat down to dinner at a Brussels summit on Thursday evening, with Europe facing one of the gravest crises in memory amid predictions of the breakdown of Greece and the potential death of the euro single currency.

Well, you can imagine our "immense frustration", as we ran the story on 19 September 2009 (pictured above - with a rather appropriate headline), on the back of a story by Bruno Waterfield. If Cameron had been on top of his game, he would have known about it years ago, rather than being "appalled" now, when it is far too late to do anything.

What this does, though, is demonstrate yet again how ignorant our masters really are. I've remarked before on how we tend to think of them as "all-knowing", but the fact of the matter is that, on a whole raft of issues, they know considerably less than you could possibly imagine.

But it is only thus imbued with the most profound ignorance that anyone could possibly be in favour of Britain's continued membership of the EU ... which tells you a great deal about this ignorant boy.