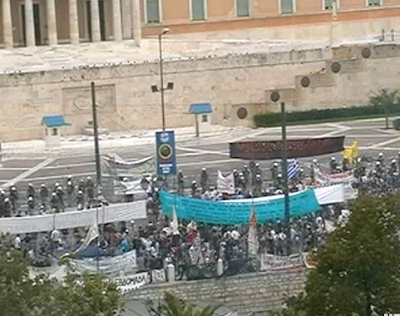 To absolutely no one's surprise, the Greek parliament has voted for the austerity package necessary to qualify for the latest round of the EU/IMF bale-out. The vote was 155 for the package, and 138 votes against.

One member of Papandreou's ruling socialist party voted "no" - offset by and MP from the conservative opposition, who voted "yes" - whence the speaker informed members that the socialist had been expelled from the party.

By this means, the political classes have looked after their own interests, and condemned their country to a lingering death. We now wait to see how the people react. So far, the violence looks pretty uncoordinated and the police seem to be coping with it. They do not seem to have been seriously challenged - although very serious amounts of tear gas are being used (14:10 hrs BST).

A fire broke out outside the Finance Ministry as clashes between protesters and police forces continued. A black cloud could be seen coming from the ministry's ground floor entrance. Police reported that protester set on fire the Post Office inside the building. Clashes were becoming increasingly violent and hundreds of people were throwing stones at the police.

Sundry acts of vandalism could be seen, with street furniture being damaged, traffic lights wrecked, and glass partitions smashed. Crowd and police seemed to be playing cat-and-mouse. Gratuitous violence was evident on the part of the police, with individuals caught by the police given beatings. Tear gas seemed to be a weapon of first resort, as the skirmishing continued.

As the evening drew near, small fires were constantly being lit, with a number of refuse skips set on fire. Clearly, this was not a low-carbon riot. Some attempts were being made to break into commercial buildings adjoining the square, in what was often unpoliced space. And yes, paving slabs were being smashed up to provide missiles to hurl at the police. The police themselves were not inhibited in throwing them back into the crowd.

But as darkness fell, the crowds had not taken the place completely apart. and the police were never even close to losing control. But there is always next time. As Zerohedge points out, there is not even one person alive who believes that within a year the third bailout of the insolvent Greek country (with even more stringent austerity measures) won't be on the table.