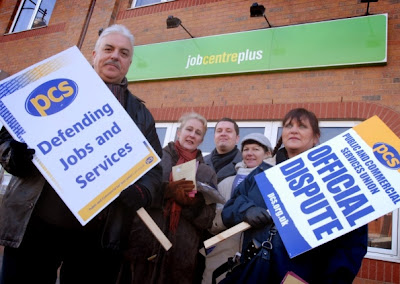 The biggest strike for five years, we are told, will cause huge disruption to schools, courts, travel and much else. It will be the most serious industrial challenge to Dave's coalition since it was formed. Hundreds of thousands of teachers, lecturers, civil servants and other workers will walk out for 24 hours in protest at plans to change their pensions, cut jobs and freeze pay.

The question is this: why is it that the people with their hands out for our money can be so easily induced to take collective action when their income stream is threatened, yet we the PBI who have to pay the bills are reluctant to mobilise (or are incapable of so doing)?

Only to an extent is this a rhetorical question. We know that the reason why there will be marches and demonstrations today is because the unions, with the huge staffs and volunteers, will be out organising – and will be funding the activities. There are no equivalent organisations which serve the taxpayer.

There is, of course, the Taxpayers' Alliance, but I've come to see that as an Uncle Tom organisation – like Open Europe. Basically, it is a front organisation, set up as a covert Tory operation to add weight to the fight against Labour, and now pulling its punches in case it embarrasses its paymasters.

Arguably, the politicians represent our interests, but they have long since ceased to do that. They look after their own interests, which are not ours. We, the people are therefore, effectively unrepresented.

But the more I think about this, the more it seems forever to have been the case. We get much rhetoric from our own side about the Magna Carta, but that was not negotiated by the people, for the people, in the manner of the American constitution. It was the Barons – the rich and powerful – looking after their own interests.

Basically – and taking a hugely simplistic view – we emerged from feudalism into a capitalist society, which in many respects was vile.

This was the sort of society which, during the war, compensated ship owners for the loss of their vessels when they were torpedoed by U-Boats, but stopped the pay of the sailors who manned the ships, the moment the water lapped over their boots. If they were lucky to survive, and clamber into a lifeboat, those sailors waited for rescue in their own time, without pay or compensation.

It was during the Second World War that the yearning for a better, fairer society drove the emergence of socialism as a powerful political force in the UK. This seemed to offer the needed corrective. But, after the 1945 landslide election, instead of socialism, we got unionism.

Union power effectively destroyed the vision of a New Jerusalem that had sustained political activists during the war. And so out of control did it get that it needed Thatcher to rein in the Union Barons – which she did in the early 80s.

However, there was no real ideology behind Thatcher – the concept of "Thatcherism" was devised by her enemies, and emerged as a political idea, ex post facto. Thus, in neutralising the unions, and in her drive for privatisation and her attempts at "liberalising" the civil service, she merely opened the way for the current dominance of the corporate, strengthening a trend that was already established.

In our progression as a society, therefore, the British have journeyed from feudalism, through capitalism and then unionism, as the dominant powers, to arrive at corporatism – where we are now. All Thatcher really achieved was to force institutions to re-invent themselves as corporates, shorn of political and humanitarian ideology.

At each stage of this historical journey, we the people, have been left out. The powers that be have given us democracy as a sop, but as the sage once said, if our vote actually meant anything, they would soon put a stop to it. Democracy is not an "ism" – it does not define an ideology. It simply offers us the pretence of being able to choose our masters, without giving us any real means of controlling them.

Thus, the question stands. Tomorrow, public sectors marches, representing corporate interests – watched over by the corporates that form our government. Why is it that we, the people, the ones who are always left out, are not also on the march - and in greater numbers?