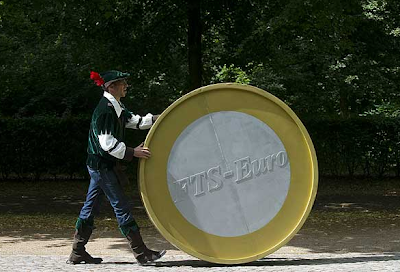 Myrtle got in on the act in The Daily Mail today, carving up the extruded verbal material into bite-sized chunks, to earn a bob or two.

Some of the background he sketches out is fair enough, but when the great sage starts his analysis, superficiality and ignorance come to the fore. Thus, does he portentously bleat: To those who believe that Greece pulling out of the eurozone would trigger a calamitous domino effect in Ireland, Portugal and even Spain, I would say: don't believe all the talk about contagion.

He then solemnly informs us that Greece accounts for only 1.9 percent of the EU's economy and, therefore, "its troubles are containable". By such means does he display a lack of grasp of the basics that is really quite staggering. Has the man-goat never heard of how dominoes work? Is he unaware of what is happening in Italy?  Line them all up, knock one over, and they all go.

The trouble is that, now the crisis moves to its end game, and the British MSM have finally woken up to the fact that something is happening in that strange, far-off distant place called "Europe", we are going to get a lot of this garbage, as the clever-dicks move in and stake their claims.

With a factoid or two of their own, a sheaf full of press agency reports and the latest briefing notes from the Uncle Toms at Open Europe, they are anybody's for a few quid, spewing out the EVM like there was no tomorrow.

Over however long it takes for the collapse to occur, no matter how it is disguised, we are going to have to suffer a massively high noise level from the MSM, when sense will be drowned by the prattle of the hired clever-dicks.

More than ever, therefore, it is important to stick to the basics, the single most important fact of which is that Greece is going to fail. And when the first domino goes, the rest will follow. Where it will end we do not know, but we are in for a serious shit-storm. No amount of Myrtle-bleat is going to make it any different - the only thing we don't know is the timescale.