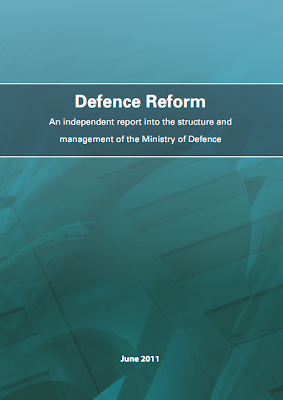 Well, I watched the 13th Century Fox announcement in the Commons yesterday, and the whole of the subsequent debate. Then I read the 82-page report. But you can only take so much punishment before you lose the will to live, so I decided to sleep on it before writing it up.

Having further cogitated, I've come to the conclusion that I'm none the wiser for the travail. More seriously, it is well-evident that Lord Levene, his Defence Reform Steering Group, and thus 13th Century Fox, are not much wiser either.

Yes we agree that there are too many generals, and the number must be cut. But that's low-hanging fruit. We observed as much in November 2009 so it would hardly take a high-powered committee and 18 months to work that one out.

And yes, there appear to be some obvious and necessary reforms amongst the 53 separate recommendations. But even if it was acting purely by chance, you would expect that. And, of course, there is plenty of right-on guff, with the Group telling us that we need to create single, coherent Defence Infrastructure and Defence Business Services organisations, to ensure enabling services are delivered efficiently, effectively and professionally.

The trouble is that the moment you see words such as "coherent" and phrases such as: "to ensure enabling services are delivered efficiently, effectively and professionally", you know they're up to no good.

What one was looking for, though, was some sense that the Group really understood the problems they were looking at, and thus knew where to start the remediation. And here, centre stage is procurement, so that one looked especially for the views on this troubled issue.

What was needed was a clear statement that the failures here stem largely from the inability of ministers and senior military staff to define roles, to match equipment to the roles, then to devise acquisition plans and stick to them.

On this, the Group starts well enough, referring to the Bernard Gray review, where it was noted that successive attempts at reform have concentrated on acquisition delivery, rather than – as suggested – seeing procurement as a symptom rather than a cause of the problems in the Department’s decision making.

We go with that, but what are the problems? And here the whole damn thing falls apart. The Group is not into problem solving, but "lessons learned". Thus, they identify "conditions for success in transformations", producing a Janet & John list that comes straight out of the Common Purpose manual on how to bullshit the public.

Thus we get these headings: leadership: vision; engagement; communication; effective people; implementation; resourced; innovation (which "visibly encourages original and radical thinking, and leverages both independent expertise and internal knowledge"); honesty: "the programmes tone inspires confidence, enthusiasm and a 'sense of opportunity' while being realistic about cuts and challenges"; and benefits.

I will not trouble you further with this, for fear of making you physically sick, but that is a measure of the beast. Exactly as Gray complained, these people are going for "delivery", without seeing the problems as symptoms of a broader malaise.

What one did not find, therefore, were any recommendations of lasting value. This report is about shuffling the deck chairs on the Titanic more efficiently, and getting more value from the band. The only merciful thing is that it is only 82 pages long, as opposed to the 296 pages that Gray delivered.

That, I suspect, will be the Group's only lasting achievement – reducing the amount of waste printed matter that goes in the bins.