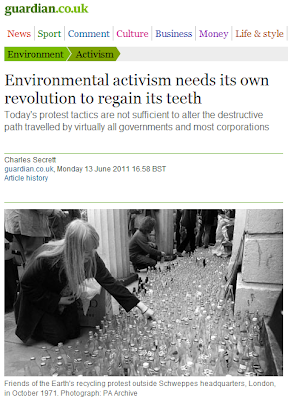 The great labour of referencing the Battle of Britain book is finished, with the completed manuscript delivered to the publishers. Now, with the pressure off for the time being, I can give my full attention to the blog, which has been sadly neglected over the past couple of weeks.

And, as marked up earlier, I promised to take a closer look at the open letter by environmental activist, Charles Secrett, published in The Guardian yesterday. This, I suggested, was potentially every bit as dangerous as what is happening on the furthest edge of Europe. He is calling for a green revolution, repeating a call he made on 13 June, in a piece headed: "Environmental activism needs its own revolution to regain its teeth".

In that piece he charged that "today's protest tactics are not sufficient to alter the destructive path travelled by virtually all governments and most corporations". Tactically, he feels, the environmental movement has stalled and now is he out setting what amounts to a vade mecum for his new revolutionaries.

The good news is that he should feel this way, revealing an insider view of a movement which, from all external appearances, seems to be sweeping all before it. The bad news is that the man seems to have a better grip on the realities of power than many of the wannabe revolutionaries on our side. But that is tempered by the indications that the man has some curious blind spots.

As to this vade mecum, first, Secrett tells the movement, "appreciate how powerful you could be from pooling your efforts", second, stop working in parallel, and unite with other causes – development, human rights, poverty, public health, democracy, community well-being – under one banner: "For people, for the planet".

Third, he says, "every successful revolution has a compelling text at its heart – ideals, goals, words, images and examples that inspire the majority. Where is your equivalent of the Rights of Man, Wealth of Nations, Das Kapital, or Little Red Book?"

You need, he thus says, to agree a joint manifesto for life. Mine the library of sustainable development strategies to spell out a route map that can take humanity from where we are to where most want to be. Then, crowd-source the draft "help the public create a new world order".

For his fourth item, he wants activists to build a cross-party political consensus in every nation, observing – with some prescience - "societal change is about power, and who wields it and why. Your regular interaction with government and companies is not the same as real influence".

From this, he declares: "You must systematically generate significant pressure to change the failing business-as-usual provision of energy, food, housing, jobs, welfare and the other things that people require for a good life", then offering the observation that: "Power resides with voters, tax-payers and constituents. No government can rule without citizen consent".

Organise locally in every constituency, he instructs, to build formidable alliances between your supporters, other community groups, unions and local businesses, stating that, "The imperative is to hold government and industry to account at elections and between elections, at AGMs and throughout the year".

And for his fifth point, he wants his activists to target the "markets". Business too needs a license to operate, he says. Consumers, shareholders and investors are the kings and queens of commerce and industry. No company will invest in, make or sell services and products that people won't buy, or shareholders reject. It's another opportunity to organise and mobilise.

Finally, he counsels, accept certain campaigns are not winnable, and simply drain resources. Absolutist positions do not hold up for the majority. Because of climate change, this probably includes total opposition to nuclear power and GM products globally. Focus instead on the conditions where these technologies become acceptable: safe, economic, free of patent control by a few companies, and effectively regulated.

That, in summary, is Secrett's pitch. We'll analyse its strengths and weaknesses in the next post.