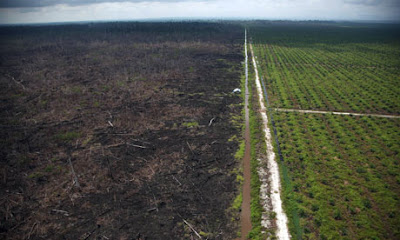 In The Observer today, there is a confused and incomplete story about how the REDD scheme is being undermined by corruption. Some countries, we are told, intend to abuse system "by pocketing billions in subsidies while continuing to fell trees."

How far this is different, in terms of corruption, from pocketing subsidies for "protecting" trees that are not under threat from logging, is not specified, but that is the other side of the scam. And it is this scam in which, as we recently pointed out, the WWF is closely implicated. For a shorter summary, see here.

But what does emerge from The Observer piece is an indication of the role of the World Bank in all this. This comes via Simon Counsell, director of Rainforest Foundation, who is cited as saying: "Redd has been touted as the quickest and cheapest way of preventing climate change, but what we are seeing are expensive and ill-conceived plans that fail to address the underlying causes of deforestation, and might make things worse."

Counsell goes on to say that: "Redd needs to be taken out of the hands of the World Bank, and a new global institution [must be] established to rigorously oversee payments to tropical countries on the basis of the actual amount of logging or deforestation that is averted."

What is not said is that partners with the World Bank, right from the beginning, have been the WWF and the Woods Hole Research Center, with Daniel Nepstad a lead player, at the very heart of the advocacy for the system.

It is utterly bizarre that a man who – on the one hand – argues that, if adopted, "REDD could trigger the largest flow of money into tropical forest conservation that the world has ever seen," and, on the other hand, is a direct beneficiary of that flow of money, is still regarded as a reliable source of objective advice on the state of the Amazon.

This is not to say that Nepstad – or for that matter the WWF and WHRC – are lying or misleading the public and governments (although it is likely that they are), but it is absolutely clear that as "players" and beneficiaries of the system they advocate, they are not impartial.

Furthermore, as The Observer is reporting, since REDD is actually leading to corruption and possibly more logging, one would think that the conservation NGOs, human rights and environment groups would be against the scheme – and largely they are.

Groups, which include Global Witness, Greenpeace International, Fern and Rainforest Foundation, have spoken out, fearing that REDD is being used by governments to victimise and steal the carbon rights of people who live and depend on the forests.

But, in the vanguard of the advocacy for the system is the WWF, which has millions and potentially billions of dollars at stake. For many indigenous peoples, faced with the system – and the malign interference of NGOs such as WWF – their cry might be "better REDD than dead" and it is about time the media (and western governments) woke up to what is going on.

Whatever else, it is about time the media, in particular, stopped taking the WWF at face value and recognised it for what it was – a big, multi-national corporate business with an axe to grind.