A different set of pigs 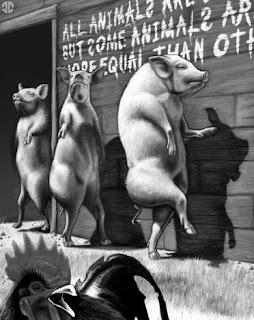 "Local communities will get the power and money to run bus services, set up broadband internet networks and take over neighbourhood recycling schemes under a mass transfer of power from the state to the people."

That is the brave new world, to be announced by The Great Leader tomorrow in his so-called "big society initiative".

The real question to address, though, is whether local communities could decide to abandon their "neighbourhood recycling schemes" and revert to landfill, as a cheaper and more environmentally friendly option.

If the answer is "no", which of course it would be, then there is no transfer of power. This is merely a redistribution of the franchise – a permit transfer which simply allows different group to do the same things.

One continues to wonder whether the man is so stupid that he does not realise that this is a sham, or whether he is so cynical that he believes we are the stupid ones, and he can get away with it.

People will soon discover, however, that all that is happening is that a different set of pigs is being put in charge. And then the gloss will rub off The Leader's project rather fast.