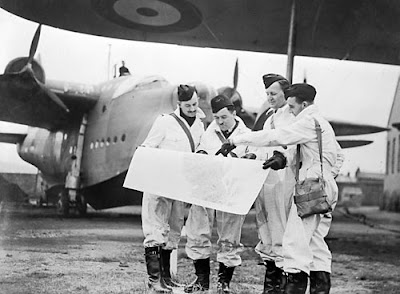 It is a typical summer day - warm with clear skies. To those who could get access to the the beaches, an increasing number of which had been cordoned off in expectation of the invasion, bathing was an option. And that morning, a Sunderland of No. 10 Sqn Royal Australian Air Force, based at Mount Batten, is escorting the merchant cruiser Mooltan, out from Plymouth after a refit.

Three and a half hours out, at around, 08:55hrs, the pilot, Flt Lt Bill Garing (pictured) - nicknamed "Bull" for his voice, not his size - sights a formation of five Ju 88 bombers heading for his ship. He flies his heavy flying boat at them aggressively and, faced with an aircraft nicknamed the "flying porcupine", the Germans decide that discretion is the better part of valour. They retire. Garing is awarded a DFC for the action.

No. 10 Squadron RAAF is an interesting unit. Established on 3 September 1939 by Australian personnel already in England, they take delivery of new Short Sunderland flying boats (pictured top). Attached to the RAF, they are the sole RAAF presence in the European theatre until 1940 when the first Australians trained under the Empire Air Training Scheme began to arrive. When the squadron is officially disbanded on 26 October 1945, its aircraft have flown 4,553,860 nautical miles, undertaken 3177 operational flights and sunk five submarines.

Read more on DAYS OF GLORY
Posted by Richard at 22:30