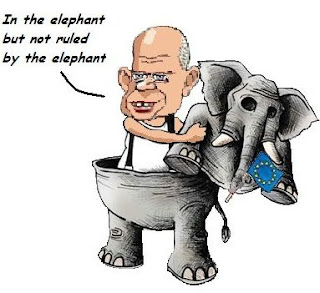 My colleague yesterday, over on her blog points out how the brave venture of abolishing the CFP and repatriating fishing policy has morphed into the same old tired Tory mantra of "reform".

Then, today, we have this cynical attempt by Nicholas Clegg Esq to exploit the gullibility of the great British Public, giving them the "right" to nominate laws they want scrapped.

These weasel words remind me the old joke about the lady at the complaints desk, being told that the product she had bought had been laboratory tested. "It failed dismally," said the man. "But it was laboratory tested".

And so it is with Cleggie's laws – you can nominate them for scrapping, but you can't require them to be scrapped. And, of course, if they are EU laws, you can "nominate" for all you are worth. But they will remain unchanged.

What is so dismal about all this is the way the media roll over and pretend that this egregious cynicism actually means something. Thus, we have The Sun prattling that, "LUDICROUS Labour laws are facing the chop at last - and Sun readers can help to choose which ones should go."

Then you actually have the slimeball in person telling us that "the state has crept further and further into people's homes and their private lives under the cover of pretending to act in our best interest." And, "That needs to change," he says.

"Over the last decade, thousands of new rules and regulations have amassed on the statute book. And it is our liberty that has paid the price," Clegg then tells us, but it is all down to "Labour". There is not a single mention of the EU.

Along with that comes Hague's speech, where he tells that that we must increase our influence in "Europe". This is part of his drive to increase UK representation in Brussels – a "new approach to foreign policy" designed to extend British global reach and influence.

There are still people around who are stupid enough to believe that Hague is a eurosceptic – as indeed some will aver that Call me Dave is also of that persuasion. Much – but by no means all – of that stupidly resides within the media. And there are as many people who actually believe Clegg is doing something worthwhile.

Stupidity aside, the actions of this loathesome pair cannot be accidental. It is part of the deliberate deceit perpetrated on us by our rulers, and the reason why we have nothing but contempt for them.

There can be no meeting of minds here - they are taking the piss, and they know it. What we think - those who are not so dumbed-down by the education system that they are still capable of thinking - they don't really give a shit. They have the power and intend to use it, until we rise up and slaughter them and give them a group hug.*

*I was advised not to write about "slaughter" as it lowered the tone and authority of the blog.