When you "read" the newspapers – hard copy and online - go through Google news and then trawl the main blogs, and still nothing registers as interesting or important (for Chrissakes, who gives a toss about PMQs?), then you know there is a problem.

It may be me, in a silly mood (it happens now and again) or it may be something more profound. I sort of get the feeling that some must have felt during the phoney war in 1939-40, a sense of impending doom coupled with the idea that nothing of any significance is being reported. It is as if the world is holding its breath, waiting for "it" to happen, whatever "it" actually is.

My mood is reinforced by the work I have been doing on the Battle of Britain narrative. This is turning out to be a serious mistake. I feel an obsession taking hold, and when that happens, I am lost to humanity – and membership always was a bit tenuous.

But what is significant and very relevant to today is the fate of Dover in the second half of 1940 and the years up to mid-1944, when it was a town under siege. But it was also a restricted area. Entry to and from was rigorously controlled, all news out of the area was heavily censored and non-official photography was prohibited.

As a result, for the best part of four years, very little came out of the town, and this continues to have an effect. Because there are so few images and the few that are available cost a fortune – see here with Pathe News - historians, broadcasters and others pay very little attention to it. As a result – or so I believe – the record has become seriously distorted, right up to today. 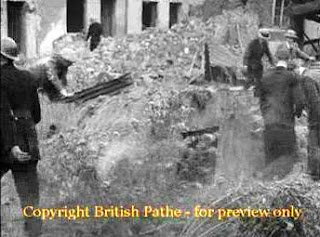 What is chilling is the propaganda film (at the top) made on 15 September 1940, and the contrast with the film made in 1944 (see the Pathe News link). It is quite worrying that the authorities – i.e., government – could have such control over news and information that even seventy years ago the story is not properly being told. Listen to the narrator tell us: "The damage is amazingly small". Then look at the pics when the censorship was relaxed.

Of course, that was wartime, but what is betrayed here is a mindset – the tendency of government to control information even when it no longer matters, and even when it did not matter in the first place. And while the government currently does not have the same degree of control as it did during the war – over here – a state of war exists over in Afghanistan. How much do we really know of what is going on?

Given that we know what governments are capable of, and how ineffective (and compliant) is the media, can we now – or ever – be confident that we have the first idea of what is going on, that we can trust a fraction of what we are told, or that we are being told a fraction of the news? And that is even without the lies, prevarications, distortions and falsehoods.

Seen in that sense – the current news is just another source of fiction. You might just as well read a novel, as many of them are more interesting and better written. But the one thing that must not be done is to accord any more credibility to either. Truth is a vanishingly rare commodity.