Look at the timeline 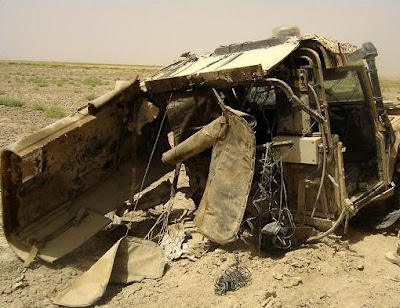 An article in The Daily Telegraph (online), headlined: "Ministers were warned that troops would die in Snatch Land Rovers", declares:


Ministers were formally warned that using Snatch Land Rovers on the frontline would cost lives years before the vehicles were withdrawn, according to previously secret documents.

The copy, based on an agency report, thus continues a fictional narrative, eagerly seized upon by the Lib-Dims, which has been going on for years, about how an increasingly frustrated Army was desperately calling for better equipment, only to be rebuffed by "penny-pinching" ministers.

And, as always, the narrative – like the story – is wrong, a dangerous and ill-measured distortion which flies in the face of the evidence, even the evidence on which this story relies.

The basis of the story is a formerly secret minute, now released by the Chilcot (Iraq) Inquiry, written by Lieutenant General Sir Nicholas Houghton, then Chief of Joint Operations at the military's Permanent Joint Headquarters (PJHQ).

But the framing is that Houghton told the government in July 2006 that front-line commanders wanted better-protected vehicles so they could carry out missions "without unnecessary casualties".

Crucially, the date of the letter is 7 July 2006 and, to follow the story properly, you need to look at the timeline. There, as we all know, the Snatch issue broke into the public domain in June 2006, nearly a month before the Houghton letter was sent.

Then, looking at the letter, we see that it is a response to a letter sent on 5 July, two days earlier, where the procurement minister (Lord Drayson) "sought confirmation as to whether there is a requirement for a medium weight, armoured patrol vehicle as an alternative to the use of Snatch or tracked armoured vehicles on current operations."

In other words, this was an exchange initiated by the minister, asking the military whether there was a requirement. And, as handwritten note on the top of the page puts it, he got an "unequivocal yes". This is an entirely different scenario from that posited by the newspaper, which gives the impression that the "general", out of the blue, was warning ministers.

The newspaper, interestingly, does not mention this note, but refers to another, an "NB" which tells the minister he can no longer say in the House that there has been no request from commanders for an alternative to the Snatch.

Here, the background is interesting, as this note is being addressed to Drayson who, hitherto, has been up front in taking advice from the Army that the Snatch is fit for purpose. This can be read as an instruction, and you do not have to look very far to work out on whose authority it is written.

But there is then another minute, in reply to this, asking the military to set out by 1600 hrs on 14 July to set out the number of vehicles required and the plans to deliver them by November.

What then transpired, we know, is that by 23 July, buying Mastiffs was a done deal, and the official announcement was made the next day.

But, as to what was going on before Drayson wrote his minute on 5 July, the public record, through the BBC, Mick Smith's blog in The Times and this blog all give adequate testimony to the fact that the Army did not "call" for the Snatch to be replaced until, effectively, ministers asked for a requirement to be put on the record.

How then the Snatch continued in use, even after the military agreed that it use should be re-assessed, is perhaps something Gen Houghton should be asked.