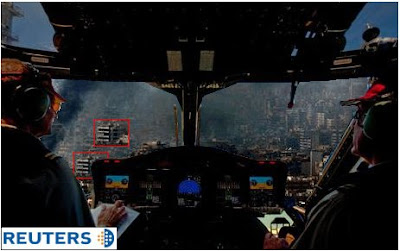 The nation's favourite newspaper is having a tee-hee moment about the misuse of photoshop by BP. Photoshop, it then says, has been used to commit "some outrageous crimes against fact-based photography," offering us some more examples.

Of a certain crime against fact-based photography committed by a certain Adnan Hajj, however, there is no mention at all. Curiously, reference to the controversy is completely missing. One wonders whether this could be because it was a crime – one of many – in which the newspapers were complicit, carried out as it was by one of their own, the Reuters press agency.

And, while the newspaper is devoting considerable space to slagging off BP over this misdemeanour, one cannot recall it being so strident way back in 2006, even if its then picture editor was on the case. It is thus sometimes very hard to avoid walking away with the idea that double standards are being exhibited by the media