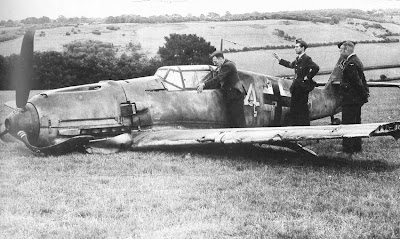 That we are celebrating the 70th anniversary of the Battle of Britain from 10 July is the result of a somewhat arbitrary choice by the then head of Fighter Command, Air Chief Marshall Hugh Dowding.

It was he that chose the day, but in fact the German actions that his fighters were then experiencing stemmed from Hitler's War Directive No. 13, dated 24 May 1940. It instructed that "as soon as enough units become available, the Luftwaffe should embark upon its independent mission against the British homeland."

The first deliberately planned attacks against the British homeland were recorded from 3 July. History was made on 8 July at 3.45 pm when the first German fighter was shot down on British soil.

This, according to this superb website was a Messerschmitt Bf 109E-3 from 4 Staffel, Jagdgeschwader (JG) 51, flown by Leutnant Johann Boehm. It was damaged in combat by Sergeant E A (Boy) Mould in a Spitfire of No 74 Squadron and forced to land at Bladbean Hill, Elham, Kent (pictured). The pilot was taken prisoner (pictured below right – note the old-fashioned courtesy). 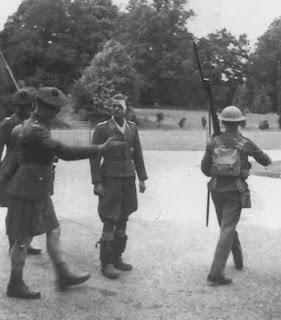 By today seventy years ago, therefore, active operations had been going on for well over a week. On this, the official Day 4, Kanalkamph was still very much in progress, with shipping attacks off Dover and Portland. During the night, there was airborne minelaying in the Thames Estuary, a tactic which was to damage and destroy more ships than direct attack and, for a time, close down the Port of London, then the biggest port in the Empire.

Weather through the day was fine, with fog in the south of England, hampering operations, although it had cleared by mid-morning. The German bombers were out after shipping, under the command of Kommodore Johannes Fink, designated Kanalkampfürher, operating from an old bus set up near a statue of Louis Blériot on top of the cliffs at Cap Blanc Nez. From the windows of his bus, he could follow the course of the Channel battle.

There were attacks on two convoys off Harwich, and two sharp air engagements off Dover, in which the Germans claimed two Spitfires and six Hurricanes, admitting the loss of five. In fact, the RAF lost one aircraft while the Germans lost seven, including a FW 200 of I/KG40.

An interesting footnote occurred at this time, with pilots reporting being fired upon by "old and dirty" Hurricanes which bore no roundels or lettering and had two-bladed wooden airscrews. No official records exist but it is possible that the Germans were using one or two captured machines, liberated during the fighting in May ... from the Belgians. Nothing much changes, it seems.

Battle of Britain thread
Posted by Richard at 15:52