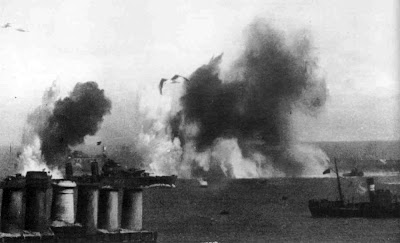 It was the weekend, the second since the official start of the battle, and a Saturday like no other. Activity off Dover had become so intense that this small area of the Channel was being called "Hellfire Corner". And not even the weather was helping. Occasional thunderstorms and some cloud in Straits of Dover proved no deterrent to the Luftwaffe, especially as it brightened later in the afternoon. The morning saw isolated raids all over Britain from Scotland to Dorset. But Channel convoy "Bosom" was the main focus of attention by the Luftwaffe.

Read more on DAYS OF GLORY
Posted by Richard at 15:56