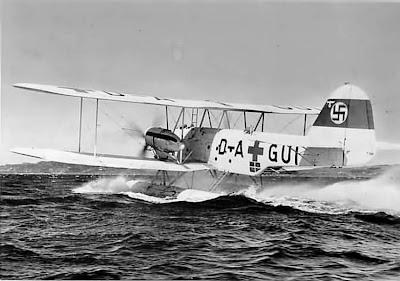 The photograph above was issued by the Germans with a press release on 17 July, 1940, exactly 70 years ago. The caption read: "The British even shot at the Red Cross! The Red Crosses at the fuselage and wings can be seen from a large distance. Despite this the British again shot a German rescue seaplane while trying to rescue British crewmembers who made an emergency landing at (sic) high seas."

Herein lies a long story, even if it stemmed more immediately from events on 11 July when there had been a vicious little fight off the coast at Deal when one of these aircraft, a Heinkel 59, escorted by a dozen or so Me 109s had been intercepted on its way to pick up a downed Me 109 pilot. On that occasion, the He-59 had been forced down and captured.

Read more on DAYS OF GLORY
Posted by Richard at 18:44