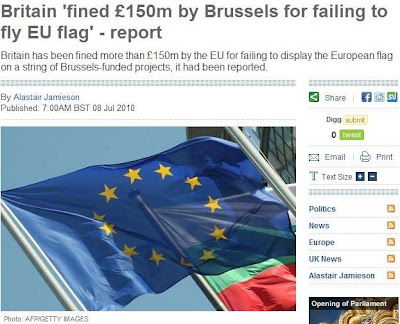 We sort of did it yesterday, and I was rather touched by the e-mails from readers who mistook the title – taken from the famous, if rather ribald rugby song – as a statement of fact. Anyhow, The Daily Mail has returned to the story today, with a long comment piece by Harry Phibbs.

This is sterling stuff as he rails against "Our masters in the European Union", who are apparently fed up with our insolence and ingratitude. They are fining us £150 million for failing to display the EU flag with sufficient regularity, prominence and enthusiasm, he writes, all under the title: "The more flags the EU run up their flag poles, the fewer salutes they get."

However, The Daily Telegraph also picks up the story (pictured), reporting: "Several schemes that received European Regional Development Fund (ERDF) money were also penalised for failing to use the EU flag on letterheads."

So far so good, except for one minor detail. The EU, this paper says, "completely denied the report." So, here we go again, with shades of the egg story. And in this case, both newspapers can't be right. The story is either true or it isn't ... or what?

I spose we ought to leave it to the professionals. I have a serious blog to write here, and when they've sorted it out, I might return to it.