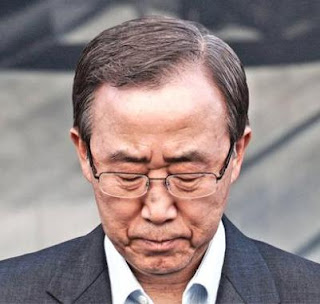 And from where do we get this? Ah! From Inga-Britt Ahlenius, a Swedish auditor who until last week served as the UN undersecretary general of the Office of Internal Oversight Services (OIOS), which is meant to keep the fight against internal fraud and corruption alive.

Of Sec-Gen Ban Ki-moon, she says: "Your actions are not only deplorable, but seriously reprehensible ... Your action is without precedent and in my opinion seriously embarrassing for yourself," in an introduction to a 50-page memo, which was first obtained by The Washington Post.

"I regret to say that the secretariat now is in a process of decay," she goes on. "Rather than supporting the internal oversight, which is the sign of strong leadership and good governance, you have strived to control it which is to undermine its position." The UN Secretariat, she says, is "drifting into irrelevance".

Tragically, this comes as absolutely no surprise to anyone who has been following the UN and knows even a little of its ways. It is a corrupt, ineffective and thoroughly unaccountable organisation. Anyone who thinks we could or should do business with it is either barking mad, stupid or corrupt, ineffective and thoroughly unaccountable. Take your pick.