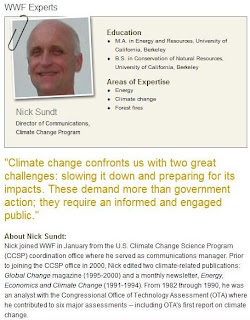 In the wake of the "Glaciergate" and "Amazongate" controversies, the WWF – whose reports were at the centre of the storm in each case – promised to launch "a full-scale inquiry involving WWF offices from several countries"

Considering that "Amazongate" did not break until 25/26 January and the WWF did not really focus on it until the end of the month, the inquiry did not take very long. "As a science-based organization," the WWF told us in a statement issued on 10 February 2010, "we are strongly committed to the integrity of our research."

Thus began a statement headed, logically enough: "Statement from WWF Regarding the IPCC and the Strength of our Science."

In it, repeated the following day by communications director Nick Sundt (pictured) on his blog, was outlined "the results of our internal inquiry and the steps we are taking to ensure our scientific publications continue to meet the highest standards for accuracy". Note the use of the word "continue" - possibly indicating a degree of partisanship.

Nevertheless, the inquiry had included "a review of our scientific procedures to determine if changes in our current protocol are warranted," and there was a claim that the WWF was "working to institute a system to ensure that the scientific community and the public can more easily distinguish between WWF's peer-reviewed scientific reports and our general communications products."

However, as regards the "Climate Change Threat in the Amazon", the results of the WWF "full-scale inquiry" into "the integrity of our research" were remarkably brief. Simply, the WWF/IUCN study "Global Review of Forest Fires" had "failed to include the correct citation – a 1999 report titled Fire in the Amazon, by the Amazon Environmental Research Institute (IPAM)."

That was it – a simple omission of the "correct citation." "Unlike the statement about Himalayan glaciers, the reference was drawn from an authoritative source, was factually correct and is supported by the peer-reviewed literature," the WWF then avers.

Looking at this in the round, this is not an ad hoc statement, on the run, made under pressure in response to events. It is a considered statement, made on the initiative of the WWF, after "a full-scale inquiry".

But what is said is not true and since we can rule out mistakes under pressure, there must be premeditation - intent. Therefore, we are talking about deliberate, structured lies.

Firstly, Fire in the Amazon - as we now know, is not a report. It is a page on a website. Interestingly, the WWF does not offer a correct citation – it cannot – it would be laughed out of court:

Anon 1999: Fire in the Amazon. Why are forests in the Amazon burning? Amazon Environmental Research Institute (IPAM): http://www.ipam.org.br/fogo/porqueen.htm

Secondly, in no conventional or accepted sense can the source be regarded as "authoritative". In the context, an "authoritative source" is a peer-reviewed scientific journal, or something of equivalent status. An anonymous, unreferenced web page on a site owned by a Brazilian advocacy group cannot be regarded as such. Thus to claim is a lie.

Fourthly, says the WWF, this assertion on the website of a Brazilian advocacy group "is supported by the peer-reviewed literature." And that is very much a matter of opinion. But, in any normal sense of the word "supported", one would expect to see direct evidence, underwritten by sound research, that 30 to 40% of the forests of the Brazilian Amazon are at risk. There is none.

Had the WWF told the truth, what would it have said? Well, assuming that the missing citation has been an accident, it could only have said something like:

We have ascertained that the missing citation was a reference to an anonymous page on the website of a Brazilian advocacy group. It was posted in 1999 and removed in 2003 and is no longer available for normal viewing.

Whether that conforms with the "highest standards for accuracy" and "scientific integrity" is moot. This is not a position I would be prepared to defend.

However, the WWF is happy to tell us that the controversy surrounding the two" improper IPCC references" is not an indication that the scientific process is broken or that the underlying climate science should be questioned.

Rather, it says, "it's an illustration of the scientific process at work. By continually reviewing and reevaluating claims, our estimates improve over time, errors are corrected, and consensus builds. It is through precisely this process of publishing, review, scrutiny and reevaluation that we are able to refine and hone our understanding of the natural world."

The trouble, I suppose, is that once you start lying and then covering up, you have to keep lying, which ends up in you delivering unmitigated bullshit such as this. In choosing between the commercial corporates and the NGOs such as the WWF, there does not seem much difference.

Moonbat thread
Posted by Richard at 16:32