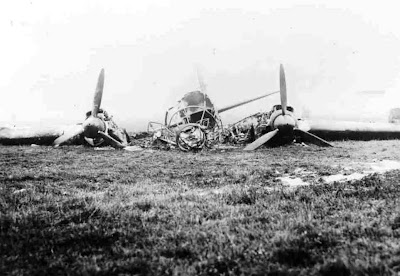 In our world of 70 years ago, fog had straddled the north of France for most of the day, also covering the Straits of Dover and south-east England. There were also thunderstorms in many districts. Predictably, therefore, air activity was extremely light as the Luftwaffe stayed at home, some grounded until late in the afternoon – which meant an awful lot of waiting for British aircrews.

As the day went on, there were attacks on a convoy off the Norfolk-Suffolk coast, and on shipping off the Isle of Wight and Aberdeen, with night attacks again in the south Wales and Bristol areas. Off the Scottish Coast between 2332 hours and 0017 hours, 14 tracks were plotted. These crossed the Fife and Aberdeen coast and bombs were dropped on Cupar, Dunfermline and Helensburgh. No reports of damage were received.

The first successful interception of the day was in Scotland, with a He-111 of KG26 shot down (type pictured) by an aircraft from No. 603 Sqn. This was followed by a Ju-88 shot down in the Solent by a Spitfire from No. 601 Sqn from Tangmere. The surviving crew member took to an inflatable life raft. 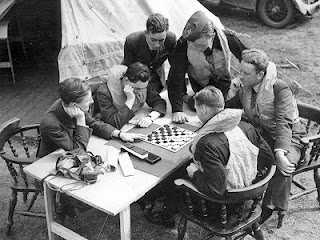 All in all, the RAF flew 313 sorties and still, on this "quiet" day, lost two aircraft. German losses totalled five although, on the actual day in 1940, the RAF claimed ten bombers confirmed, two "probables" and two "unconfirmed" fighters shot down - 14 as against five.

Through the whole battle, each side consistently over-claimed the number of "kills" by a factor of about two, while under-reporting their own combat losses and ignoring accidental losses. These were high on both sides throughout the war. Ironically, each side accused the other of inflating their victories, also claiming that their own figures were accurate.

This was a war of words and images as well as of deeds, with propagandists "spinning" furiously. Blair and his New Labour pals might think they invented "spin", but the Ministry of Information was well practiced in the art by 1940. Rarely, in newsreels, for instance, was there ever a wreck shown of a Spitfire or Hurricane - but Luftwaffe wrecks there were aplenty.

Sharp-eyed observers might notice a considerable element of recycling, as the same wrecks cropped up in successive newsreels. But this was all part of keeping the Home Front on-side. It was a closer-run thing than many realise, and the propaganda war played a vital role.

Battle of Britain thread
Posted by Richard at 21:11