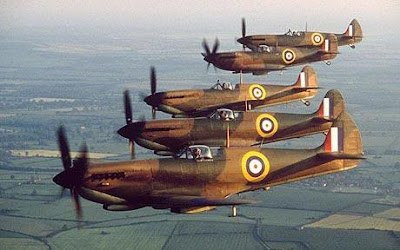 In The Sunday Telegraph today, we see the launch of a competition to design national memorial for the Spitfire, this single iconic aircraft type having become the symbol for the Battle of Britain – and much else.

In a way it also symbolises how far adrift the sentiment is from the reality that the newspaper shows a picture of five Spitfires in echelon right formation – a flight of what are a mix of different marks, mostly Mk IXs with a Mk XI (possibly – it is very difficult to tell) closest to the camera - all types which equipped fighter units only from 1942 onwards. The picture, however, is a promotional still from the 1988 TV series Piece of Cake, a series so execrably bad that I could never bring myself to watch it.

We are, therefore, seeing something totally artificial, something which is not remotely representative of the Battle of Britain. Below is a Mk I - the real thing. The photograph was taken in 1940. Note how bent and tatty the machine is - click to enlarge - as opposed to the models today, glossy, clean and polished to within an inch of their lives. The "pretender" is under that, the PR Mk XI dressed up to look like a Mk I. 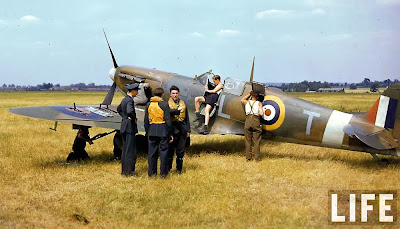 One should not be churlish about this, but the fact is that the Battle of Britain is much more than the Spitfire and, in fact, much of the heavy lifting was done by the Hurricane. And while the aircraft is cited as a brilliant design and the envy of the enemy, the Mk I – which bore the brunt of the fighting in 1940 - was outclassed in important respects by the Me 109E. 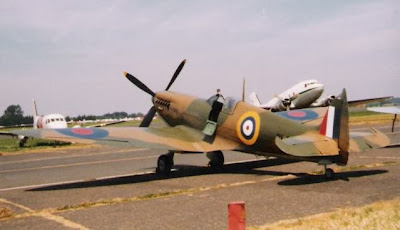 Later, the Fw 190 completely outclassed the Mk V, especially at low altitudes and, while Spitfire development continued to the Mk 24, long before then the Germans were producing Me 262s and other jets, with only the obsessions of Hitler holding back their earlier introduction. And, in the piston aircraft stakes, the Spit was easily outclassed by the later model Mustangs.

But for the "Spitfire legend", which was by then obsessing the RAF and well as the public, the Spitfire should have been junked after the Mk IX and the RAF re-equipped with Mustangs built under license. And, as time passed, the gap increased. Hawker airframes, such as the Typhoon, the Tempest and then the superlative Sea Fury, far outstripped the later marks of Spit, with the Sea Fury ending up the fastest single-engined production piston fighter in history.

In short, the Spitfire was an aircraft of its time – but a very short time. It was then kept on as a symbol far beyond the time when it should have been replaced. It has now come to symbolise something that never existed, in place of a better understanding of what did. That understanding is being lost as we succumb to the joint pressures of Dianification and dumbing down, so much so that current coverage of the Battle of Britain, 70 years on, is a disappointment.

Leaders in the field, on the web, are the official MoD site, the Imperial War Museum, the BBC, the Battle of Britain Historical Society and a media site. Frankly, though, none of them give a really good overview of the battle, much less a good daily narrative. None of them give this great historic event the effort it undoubtedly deserves. But for the "Few" and the great machine supporting them and fighting the other battles, we could be speaking German.

My own modest coverage of the Battle is, by comparison, not quite as modest as I thought it would be – which is more a reflection on the rest than of my work. But I am nonetheless sufficiently affronted to want to put some more labour into it and produce a record on the web which is worthy of the event. I have thus reactivated a site we set up earlier, called Days of Glory, which I am currently populating and expanding. There, day-by-day, I will transfer the posts put up here, to give a dedicated record of the Battle.

It occurred to me that, between us, we have more than enough expertise and experience to write a definitive record – heck, some of our readers were actually there – and we have a forum to exchange ideas. Further, if anyone wants to volunteer as part of the writing team, they would be very welcome. Some might care to write stuff for their own blogs, for me to lift - and anyone is welcome to lift this material.

This event – this battle – is part of our heritage. It is too important to be left to the lacklustre efforts of the "official" sites. It is something we can do, and leave our mark – a true memorial, our memorial.

Battle of Britain thread
Posted by Richard at 16:21