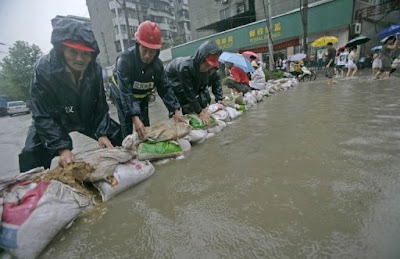 Then we find out that, for the first six months of the year, 2010 has been warmer than the first half of 1998, the previous record holder, "by 0.03 degree Fahrenheit," according to Jay Lawrimore, chief of climate analysis at the federal National Climatic Data Center.

Frankly, this is risible – or a goad of lollocks if you prefer. The very concept of a global temperature is highly dubious but, even if you accept that it could or should be measured, the idea that you can get to two places of decimals is tosh. This is what is known as false precision.

A period of a El Nino weather pattern is being blamed for the hot temperatures globally, which means we are talking about "weather" rather than climate, and abnormally warm temperatures have been registered in large parts of Canada, Africa, tropical oceans and parts of the Middle East.

But just as false as the idea that there can be a single global temperature that actually means anything, is the idea that "elevated" temperatures necessarily mean drought. You can certainly see the association in the dismal minds of the hack – hot equals dry equals drought ... doh!
To reinforce this narrative, we thus have the cuts trawled for examples: Northern Thailand is struggling through the worst drought in 20 years, while Israel is in the middle of the longest and most severe drought since 1920s.
In Britain, this year has been the driest since 1929.

Set against that, though, are the massive floods in China. Currently, 146 are reported dead in the latest spate of rainstorms and floods.

China is ravaged every summer by heavy rains and deadly flooding but the weather has been especially severe this year. Rains and flooding have reportedly caused economic losses totalling $17 billion dollars since the start of the year. Rain-triggered floods have affected some 38.2 million people and 1.3 million had been evacuated.

Authorities in the Philippines are also bracing for damage caused by Typhoon Conson, which killed 39 people and left 84 missing, and Vietnam is threatened. Meanwhile, at least eight dead are reported as heavy rains lash Japan. In the city of Kani in Gifu, flood water from a river washed away 28 trucks, and 20 privately owned cars from the parking lot of a transport company. 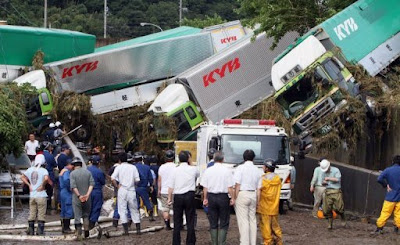 Nine heavy-duty trucks were seen piling up against an elevated railway bridge (pictured) with total damage estimated at 300 million yen (3.4 million dollars). Said Ryuji Sakai, a spokesman for the company, Tougi Transport: "We didn't expect such a flood and there were no warnings at all."

Singapore has also been hit by recent flash flooding and parts of India have been badly affected. The flood toll in Punjab and Haryana provinces has reached 40, with the situation reported as "grim" in some districts.

Further west, heavy floods are being experienced in the Yemen, with reports of around 20 people being kille, more than five people injured and others still missing. Heavy rains are covering wide areas.

Ghana, on which we reported earlier, is still having problems, with some 136 flood victims at Bosuso in Fanteakwa District in the Eastern Region appealing to government housing aid after the collapse of their homes. The victims comprise 55 children and 81 adults drawn from three communities. More than 14 houses, mostly made of clay, collapsed over the last weekend after a downpour which lasted for almost twenty–four hours. Three rivers have overflowed their banks. 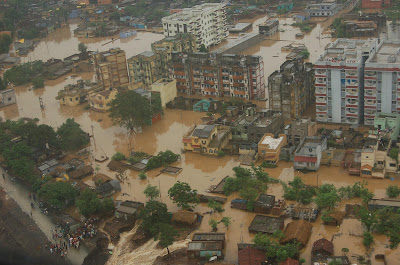 And, in rain-soaked Brazil, flooding has continued. Late last month, at least 1,000 people were unaccounted for after had floods devastated a series of small towns and cities in Brazil's north-east – traditionally one of the drier areas.

Torrential rain had "hammered down" on the north-eastern states of Alagoas and Pernambuco, over 1,200 miles (2,000km) north-east of Rio de Janeiro, causing rivers to swell and at least one dam to burst. The resulting floods tore through dozens of towns with aerial images showing several areas that had been reduced to giant piles of rubble.

Reports then spoke of flooding killing 41 people, with officials scrambling to get food and medical aid to two flood-hit Brazilian states where "torrents of water ripped through towns, killing at least 41 people and driving 120,000 from their homes."

Further north currently, there is flooding near Monterrey, Mexico, caused by heavy rains from Hurricane Alex. This has been partly responsible for carmakers temporarily shutting about seven assembly plants. Throughout south Texas, there has also been heavy flooding.

Of course, all this don't mean nuffink. It's just weather. But it means a great deal more than garbage about a global 0.03 degree Fahrenheit rise in temperature, which has USA Today reporting: "World sizzles to record for the year". The only thing sizzling though are their brains. They fried years ago.