An alibi in flames 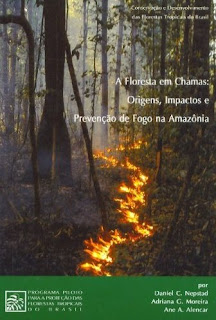 Returning to The Sunday Times retraction of its "Amazongate" article, readers will recall that the paper declared that the IPCC's Amazon statement is supported by peer-reviewed scientific evidence.

In the case of the WWF report, it said, the figure had, in error, not been referenced, but was based on research by the respected Amazon Environmental Research Institute (IPAM), which did relate to the impact of climate change.

This statement mirrored an earlier statement directly by the WWF, where the organisation claimed that the source for its statement was "Fire in the Amazon, a 1999 overview of Amazon fire issues from the respected Instituto de Pesquisa Ambiental da Amazônia (IPAM – Amazon Environmental Research Institute)."

The source quotation from "Fire in the Amazon," we are told, reads "Probably 30 to 40% of the forests of the Brazilian Amazon are sensitive to small reductions in the amount of rainfall."

Well, we have now ascertained that there are three versions of this document. It starts off life as: "Flames in the rain forest: Origins, impacts, and alternatives to Amazonian fires", published in English at 161 pages.

In both cases, they are published by the "Pilot Program to Conserve the Brazilian Rain Forest" in 1999, with the support of the World Bank and the Ministry of Environment Secretariat for the Coordination of Amazon.

Then it reappears as an IPAM publication, in a revised version 204 pages long, in Portuguese only, with the same title as the shorter version.

English and Portuguese versions are in electronic searchable form and, as far as we can ascertain, the claim: "Probably 30 to 40% of the forests of the Brazilian Amazon are sensitive to small reductions in the amount of rainfall," is not present in any version. Nor can we find any variation or close approximation, nor any form with a similar meaning.

In The Sunday Times, it is averred that this document does "relate to the impact of climate change." And so it does ... sort of. It describes how "fires may be affecting climate patterns" (above) and indeed, precipitation. But there is absolutely nothing about climate change affecting rainfall, or the forest being destroyed by small (or any) reductions in rainfall.

In its anxiety to cover its back, and prove "Amazongate" false, the WWF may have been party to the promulgation of a provable lie. Or maybe, this is just another of Nepstad's little "misinterpretations". Either way, though, the IPCC is in a little difficulty. Not only is its claim unsupported by its original report, newly offered reference doesn't support it either.

And they thought that The Sunday Times retraction was the end of the matter. It is only starting.

Moonbat thread
Posted by Richard at 00:38