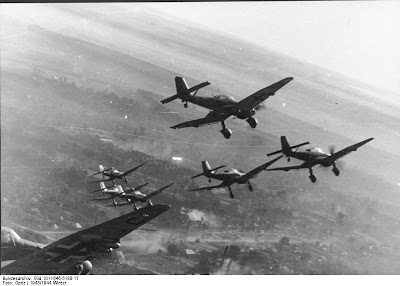 This was another day characterised by attacks on convoys, with attacks off the Suffolk coast. Portland Harbour was also raided. During the night there was activity over south-west England, East Anglia, the Yorkshire coast and Portsmouth. Weather was overcast in the Channel with a cloud base at 5,000 ft. Thunderstorms and bright intervals in the Midlands and North.

Action started early, with two Luftflotte formations operating out of Cherbourg detected at 7.30 am heading for a convoy in Lyme Bay. Six Spitfires and six Hurricanes were scrambled, with the Hurricanes intercepting ten Stukas and about 20 Me 109s shortly before 8 am. One Hurricane was shot down almost immediately.

The picture shows a gaggle of Stukas (Junkas 87s) from the Bundesarchiv, taken some time in 1943 – location unspecified. It is a rare shot of a formation in action, and presents something of the image that the Hurricane pilots must have seen. The action on 11 July was successful as, although two Spitfires were shot down, the Stuka attack was disrupted and no ships were sunk.

There was also a battle over the Channel over a German rescue seaplane, when two Spitfires were shot down and the seaplane forced to land. There were Stuka raids on Portland, at which the RAF was late in arriving, the radar having given false (low) estimates of strength, although a later raid on Portsmouth was well and duly carved up. A night raid on the city though, by 30 bombers, killed nine and injured 50.

At the end of the day, the Luftwaffe had lost eleven aircraft and the RAF four in the course of 432 sorties.

Battle of Britain thread
Posted by Richard at 14:55