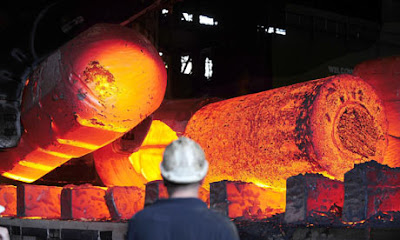 If ever there was a necessary state intervention, it was the loan agreed by a dying Labour government to Forgemasters to finance the production of components for nuclear power stations – of which there is a worldwide shortage of capacity.

Yet, one of the first things the Clegerons did was cancel the loan – and on grounds that now look very dubious indeed, if The Guardian and the rest of the media have got the details right.

With accusations of sleaze in the air, we are looking at an administration which is on track to be just as vile and disreputable as its predecessor, only in a fraction of the time, especially with that sleazebag Huhne being accused of messing up the loan – possibly deliberately (8 minutes into the video).

The current row follows on from a report by KPMG which tells us that without more direct support from the government, it is still uneconomic for utility companies to invest billions of pounds in nuclear power.

The view is that it is unlikely that the new generation of nuclear plants will actually get built – something which has been evident for some time – simply though noting the lack of news or actual progress. As the timetable slides, and as we see the Forgemaster loan go down the tubes, there is only one conclusion – we are stuffed, stuffed, stuffed.

The Chinese, who recently reported commissioning their first fourth generation plant, and has unveiled plans to increase its 9.1 gigawatts of nuclear power to 40 gigawatts by 2020, must be lost in amazement at the willingness of British politicians to commit economic (and political) suicide.

Our expectations of the previous administration were always low, but there are some who actually expected more of the present incumbents. But it seems to be a general rule of thumb when assessing governments that, just when you think things have got as bad as it is possible for them to be ... they get worse.