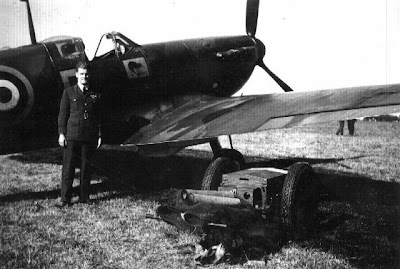 This Wednesday seventy years ago, there is light cloud over Channel with rain in most other areas. Visibility is poor in the west.

The war started at 0630hrs when a hostile aircraft appeared over Glasgow and bombed the Hillingdon district. A printing works was seriously damaged. Some windows of the Rolls Royce factory were broken and a few minor casualties were reported. This aircraft was intercepted and it is reported that the rear gunner was killed and one engine put out of action. The enemy aircraft dived into clouds and was lost but it is doubtful if it will reach home.

At 0755hrs, an enemy formation was detected coming in from the German coast and heading towards a convoy in the Thames Estuary. No. 54 Sqn Spitfires from Hornchurch, currently using Rochford, are scrambled to make an interception. No. 64 Squadron Kenley (Spitfires) also intercepted. No German aircraft are shot down.

Read more on DAYS OF GLORY
Posted by Richard at 21:29