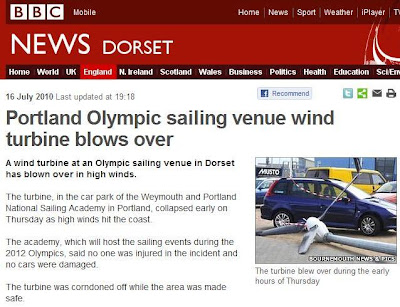 A wind turbine at an Olympic sailing venue in Dorset, we are told, has blown over in high winds. The turbine, in the car park of the Weymouth and Portland National Sailing Academy in Portland, collapsed early on Thursday as high winds hit the coast.

Dorset, it seems, is not having a happy time with its windmills. Not very long ago, Southwell Community Primary School in Portland was forced to turn off its machine after it developed birdicidal tendencies and slaughtered at least 14 birds in the past six months.

Installed at a cost of £20,000 with a grant from the Department of Energy and Climate Change, it was forcing headteacher Stuart McLeod to come into school early to clear up the bodies before his young pupils spotted them. School governors consulted seagull eyesight experts and investigated bringing in bird-scaring plastic owls to solve the problem, but to no avail.

McLeod said they had tried everything to stop the carnage but had no choice but to shut the turbine down. He said: "We've got the ideal location for wind power but unfortunately seagulls kept flying into it." And he can't even get rid of their bird chopper. Because of the grant conditions, it has to stay on site for five years or the school has to repay the money.

But this is not irony. Oh no! This, my dear readers, is much better. It is one-hundred percent, 26-carrot goldy. Absolutely brilliant.