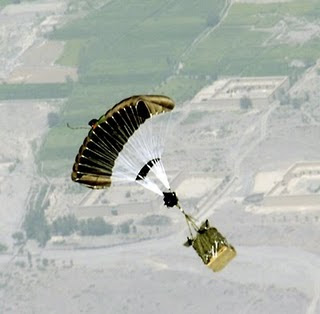 Before I get down to proper work, I couldn't avoid the temptation of flagging up this report by the BBC's so called defence correspondent, Caroline Wyatt.

"In the blazing afternoon sun, a heat-haze rises from the tarmac as soldiers from 47 Air Despatch Squadron load up huge pallets of water and rations into the back of a Hercules C-130 aircraft," she tells us.

This is all about Our Brave Boys in the RAF air-dropping supplies to Our Brave Boys on the ground. This, she rather unhelpfully tells us: "... is a method dating back to the air drops of World War II, when British troops operating in France were re-supplied by air." She even gets some unfortunate airman to say those words to camera.

Well, up to a point, Lord Copper, although we then go on to see the fair Caroline witness a high-level night drop on a remote patrol base in Afghanistan, a "text-book drop" where all the supplies obligingly arrive on target.

And the chances of that happening unaided are about zero. Left to the ministrations of the Crabs, the brown jobs would still be bartering with the Taureg to get their supplies back. And yes, I know the Taureg inhabit the Sahara. That's the point.

The miracle ingredient that allows the RAF to hurl things out of the back of an aircraft in the expectation that they will actually land anywhere near where they are aimed is a US-devised system called JPADS. These are GPS precision-guided parachutes - brilliant stuff, much appreciated by all.

Now, you would think the fair Caroline in her report might actually mention this piece of technological wizardry – but not a bit of it. It's still a method dating back to WWII, according to her.

It is possible, of course, that the MoD put a block on it being mentioned – they are stupid enough to do that. Although I cannot imagine why. It is not a secret – even I wrote about it more than two years ago and its acquisition was reported in 2007.

Another possibility is that the fair Caroline didn't notice the system, or didn't understand it, so she didn't report it. That can't be ruled out. I've only met the lady once, and then very briefly, but she didn't strike me as the sharpest knife on the planet. I don't think its just because she's a girlie Beeb - although that doesn't help.

Then, the other possibility is that the BBC thought a discussion of JPADS was far too complicated for the poor little British viewers, so it left the detail out. That patronising view, in fact, is all too possible. But whatever the cause here, we are seeing a serious bit of dumbing down.

What I don't understand, though, is why so many people are willing to pay their license fees in order to have their intelligence insulted in this way.