When the North wind doth blow 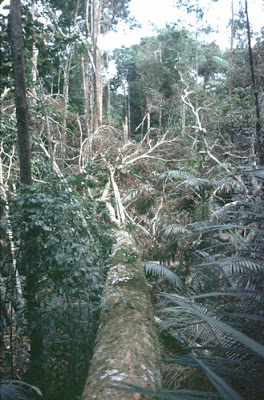 If you read people like Daniel Nepstad (who ever thought I'd ever be writing a post where I did not have to explain who he was?), you'd have got the impression that 2005 was Armageddon year for the Amazon, when the rains stopped and everything shrivelled up and died.

Of course, droughts in the Amazon aren't like that – more often they are characterised by the presence of a dry season when normally there is no break in the rains, or by an extension of the normal dry season. But, such is the vastness of the basin that even drought periods cannot be guaranteed to bring er ... drought.

That was the case in 2005 where, according to this paper, the drought did not affect central or eastern Amazonia. It was thus different from the El Niño-related droughts in 1926, 1983 and 1998, and makes a nonsense of a claim that a combination of ENSO and Atlantic-induced droughts will necessarily produce extended dry periods in the same areas.

What actually happened in 2005 was that there was an extended dry season which heavily affected parts of southwestern Amazonia, giving rise to a considerable number of forest fires. This same area, currently under El Niño influence, seems now to be rather wet.

Certainly, in 2005 it is good to know that the rains returned in October 2005 and generated flooding after February 2006. And, as we have recorded, the flooding has continued to the present day.

But, according to a paper just published, that has not been all that has been going on. In early 2005 there was a single, huge, violent storm that swept across the whole Amazon forest, killing an estimated half billion trees, the current study being the first to produce an actual body count for this type of event.

The losses are much greater than previously suspected, the study's authors say, suggesting that storms may play a larger role in the dynamics of Amazon forests than previously recognized.

One of the lead researchers, Jeffrey Chambers, points out that the appearance of a forest hit by a storm is very different from one affected by drought – if you know what you are looking for. And, he says, "We can't attribute [the increased] mortality to just drought in certain parts of the basin—we have solid evidence that there was a strong storm that killed a lot of trees over a large part of the Amazon."

Thus, although in in 2005, large parts of the Amazon forest experienced one of the harshest droughts in the last century, with suggestion that drought was the single agent for a basin-wide increase in tree mortality, a very large area with major tree loss (the region near Manaus, in the Central Amazon) was not affected by the drought.

There, the number of trees killed by the 2005 storm was equivalent to 30 percent of the annual deforestation in that same year for the Manaus region, which experiences relatively low rates of deforestation. And when researchers extrapolated the results to the whole Amazon basin, they came up with the figure of between 441 and 663 million trees destroyed - equivalent to 23 percent of the estimated mean annual carbon accumulation of the Amazon forest.

Given the huge controversy over forest loss due to climate change, one wonders how much of the loss in 2005 possibly attributable to storm damage has previously been attributed to drought, and how that might have affected the findings of the IPCC.

Whatever else though, this further points to the complexities of the Amazon, and underlines how little we know – so little that we really should be avoiding the simplistic nostrums of the warmists. We could be saving the planet from global warming, only to have blown down by the wind. But then, what we lose through more warming could be gained by the expected reduction in storms (or vice versa).

One also wonders whether the kids in the Amazon have their own little rhymes, such as, "when the North wind doth blow, we shall have matchsticks". It's not quite as good as our version, but it might sound better in Portuguese, or whatever.