Thick end of the wedge 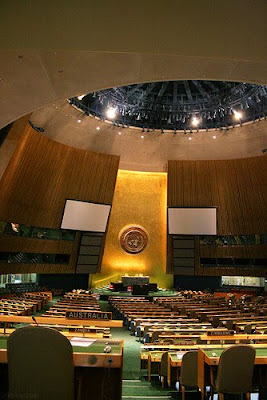 "EU to be given prominent UN role," writes Bruno Waterfield, noting that the EU is to be given similar rights and powers to a fully fledged nation state in the United Nations general assembly.

This is the general assembly, not the Security Council, so it isn't taking our seat, and all that garbage. Not that it really makes much difference. On UN matters, we tend to follow the EU lead, only disguise it to make it look as if we are still in control ... just as we do with other EU-related issues.

The special significance here is that this is implementing the Lisbon treaty, and it is happening under the Tory watch – with absolutely no difference from what would have happened if Labour had managed to cling on to power. In other words, in this vital area of international relations, nothing at all is affected by a change in administration. We're shocked!

Little Willie Hague, conscious of the embarrassment quotient, is trying to put a brave face on it. EU sources are giving the game away though. They are telling Bruno that he was forced to "back down" and accept this enhanced role for the EU as part of the creation of a Brussels diplomatic service under the Lisbon Treaty. So much for "in Europe but not ruled by Europe", but then that always was fantasy.

"The UK's support is strictly limited and does not imply agreement to seek additional rights in any other forums and does not prejudge whether the EU should actually exercise those rights on any particular issue," says Lidington.

Farage is in his element, with something happening that even he can understand. "This is the thin end of the wedge. How long before David Cameron concedes our seat at the UN Security Council?" he asks, throwing in an unmemorable one-liner to boot. "The Tory government has swallowed EU federalism hook, line and rusty old sinker," says his PR man on his behalf.

The thin end of the wedge analogies are a bit late though. We're well past the thin end, choking on the thick end ... and they're still hammering it in. You can see the wedge at the back of the picture and we're about two-thirds down it.

Funny enough, the only real opposition is coming from Arab and African countries. They have expressed anger because their own regional organisations will not be given the same privileges as the EU. But that will be the next step. Regional governments, as part of the New World Order.

Little Willie is watching it all happen, of course. But he can do (or will do) precisely nothing about it.