The source of Amazongate


STOP PRESS: Detailed coverage in Watts up with that? 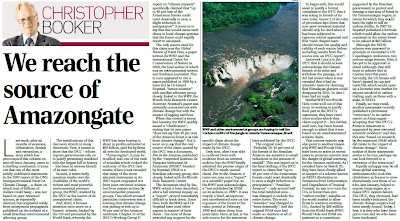 Well, we've got there officially, to the very source of "Amazongate", a controversy which started with two posts, on 25 January and the following day. We can now demonstrate unequivocally that the IPCC did get it wrong on the Amazon. As significantly, the WWF - which was partly responsible for the false claims - has conceded the game. Booker devotes his whole column to the story and, to come, is a news story based on the column.

The column covers the ground but I want to set out on this post the full story, with all the necessary links, making it a "one stop shop" for future reference. This will this become the "index" piece - it will probably take a few days to complete, so any suggestions will be very welcome. This is interactive writing.

Before we start in detail though, the crux of the matter is that the story has been nailed through the work carried out on this blog, with the active assistance of forum members. Without it and the help of others, all working alongside the MSM, we would not have got there.

As a result, the WWF has been forced to admit that its source of information about the Amazon, on which the IPCC relied, was an anonymous tract called Fire in the Amazon, formerly published on the webpage of an obscure Brazilian advocacy group. This webpage is not based on any known or identified research and is not peer reviewed.

As we now know, purely on the basis of an unreferenced and unsupported assertion on a website (which was removed four years before publication), the IPCC actually claimed:

The IPCC the goes on to say that: "It is more probable that forests will be replaced by ecosystems that have more resistance to multiple stresses caused by temperature increase, droughts and fires, such as tropical savannas."

Right from the very start, we had said that these claims were "unsubstantiated" and with the trail ending in the website, this proves it. But, even as of last Thursday night, the WWF was not prepared to concede the point. Benjamin Ward, head of press and media relations for WWF-UK, sent us a long list of further references, arguing:

The WWF/IUCN Global Review is now ten years old but peer‐reviewed "good evidence" published since 2000 has reinforced its conclusions as sound. We stand by the Global Review as accurately depicting the risk to the Amazon from reductions in rainfall and being in line with a broader body of peer-reviewed, scientific evidence.

But, when we asked Mr Ward to identify the papers, the references to which he had sent us, that replicated or directly supported the IPCC claim, he was unable to do so. Merely, he said, they "support and reinforce the risks to the Amazon from climate change". And that is all he can manage, six months down the line since we first raised our "Amazongate" charges.

As it stands, therefore, the IPCC claims are a train wreck. The "Rowell and Moore 2000" paper, on which the IPCC relies, refers to a non-peer-reviewed report called: Global Review of Forest Fires. As "gray" literature, jointly published by the WWF and the IUCN, it should not have been used by the IPCC, without rigorous checking. This was never done.

This notwithstanding, the Rowell and Moore claim is actually unreferenced in their report. The WWF tell us that a reference to a paper in Nature (Nepstad 1999) only applies to the second sentence of the relevant paragraph. Just for reference, this is:

However, we only have the word of the WWF that the actual reference intended was omitted accidentally. That claim comes from a press statement on 31 January and from a letter in The Sunday Times on 7 February by David Nussbaum, Chief Executive of WWF-UK.

At this point, we should really not need to go any further as regards the IPCC. It has cited as its source a non-peer-reviewed report which lacks any further reference to support its claim. The IPCC authors did not notice and this was missed throughout the review process. That is already enough to support the charge that the IPCC claim was unsubstantiated, which is actually different from saying it was wrong.

If we are terribly kind and tolerant, though, and allow them the missing reference, we have Rowell and Moore and thus the IPCC relying on Fire in the Amazon. That is the source on which everything depends.

On 31 January, this was described as: "a 1999 overview of Amazon fire issues from the respected Instituto de Pesquisa Ambiental da Amazônia (IPAM – Amazon Environmental Research Institute)." Then we were told that the source quotation reads: "Probably 30 to 40% of the forests of the Brazilian Amazon are sensitive to small reductions in the amount of rainfall." Incidentally, we are also told that, "Our [WWF] report does NOT say that 40% of the Amazon forest is at risk from climate change."

In Nussbaum's letter of 7 February, Fire in the Amazon is still "a 1999 overview" by the respected Amazon Environmental Research Institute that states. In an "update" of 10 February, however, it becomes "a 1999 report titled Fire in the Amazon by the Amazon Environmental Research Institute (IPAM)". And on the following day, on the blog of WWF communications chief Nick Sundt, it remains a "report".

That it is a "report" (implying a degree of formality) seems to be confirmed by Daniel Nepstad, director of the Amazon Environmental Research Institute and senior researcher at the Woods Hole Research Center. In an unsolicited statement made in February, he declared that Rowell and Moore "had originally cited the IPAM website where the [40%] statement was made". This definitely conveys the impression that the current citation referred to another source - and by the same token seems to rule out the website as a source.

Interestingly thouygh, Nepstad does not provide a citation for that "new" source. He merely states that Rowell and Moore 2000 "omitted some citations in support of the 40% value statement," but if you look carefully, he does not state what they should have been.

On 18 March, however, Nepstad (with others) makes another statement. This time, he tells us that:

The passage in the IPCC that refers to the susceptibility of the Amazon forest to drought cites a World Wildlife Fund review report which, in turn, cites an article in the journal Nature. Ideally, the IPCC should have cited the Nature article as well as several other existing articles in support of its statement, and not a WWF report.

Bizarrely though, in his February statement, Nepstad has already dismissed the 1999 article - that is Nepstad 1999. And it is not just that it refers only to forests which are "severely drought stressed in 1998" (which should invalidate it as a source) but also that this forest area affected is only 15% of the total area of forest in the Brazilian Amazon (and an even smaller fraction of the total forest area).

In that February statement though, he also refers to another article published in Nature. This is a 1994 paper, in which his team estimated that approximately half of the forests of the Amazon depleted large portions of their available soil moisture during seasonal or episodic drought (Nepstad et al. 1994). Then, after the Rowell and Moore report was released in 2000, and prior to the publication of the IPCC AR4, Nepstad claimed that new evidence of the full extent of "severe drought" in the Amazon was available.

In 2004, he had declared, "we estimated that half of the forest area of the Amazon Basin had either fallen below, or was very close to, the critical level of soil moisture below which trees begin to die in 1998."

That was where he had stood in the February of this year, but a month later he does not repeat his references to the 1994 paper, relying on the 1999 paper which he has already ruled out. Then, he avers, "The point is, however, that the statement made by the IPCC about the sensitivity of Amazon forests drought was consistent with our knowledge at that time, and has been reinforced by new studies."

So, at this stage, while the WWF (which had produced the paper on which the IPCC had relied) was citing a 1999 "overview" produced by IPAM, of which Daniel Nepstad was head, Nepstad himself had variously dismissed his own paper of 1999 and argued that his earlier 1994 paper applied, only for him to "reinstate" his 1999 paper, airily declaring that the IPCC statement was "consistent with our knowledge at that time".

But this is what has been bugging us all along. Nepstad didn't write the 1999 paper on which the IPCC relied. This was written by Rowell and Moore. They, alongside the WWF (the IUCN has been silent on this issue) have then said that the source document is Fire in the Forest - which just happens to be produced by IPAM, prop. D Nepstad – although that is irrelevant. Nepstad's institute only produced it – it didn't try to pass it off as an authoritative paper. That was down to the WWF.

And now it really does not matter what they say. They have been caught out - the IPCC has been caught out. There is nothing they can say - apart from promise they will try to get the IPCC claims removed.