Does anyone actually care? 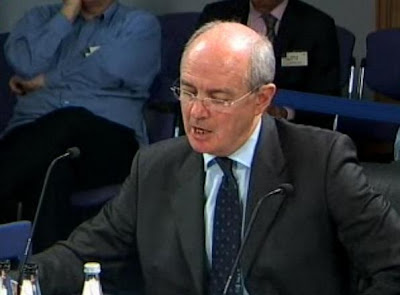 Watching three days-worth of oral evidence at the Chilcot inquiry on the Iraq war is not for the faint-hearted, but it is better watching the video over the internet than being there.

The reason for so doing is to follow the strains of evidence related to the Snatch Land Rover and especially relevant was Tuesday's evidence from Lt Gen Sir Robert Fulton, Deputy Chief of Defence Staff (Equipment Capability) from 2003 to 2006, and his successor, Lt Gen Andrew Figgures. He held the post from 2006 to 2009.

I write this with some diffidence, but am bolstered by the comments of a contact with whom I have been working these many years. He articulated by own impressions – that these two senior generals, when it comes to protected vehicles and IEDs, are extraordinarily ignorant. If you have the time, watch the performance of Fulton (pictured). It is lamentable.

But with Dannatt yesterday, if you put the narrative together, from the evidence, you come inescapably to the conclusion that the Army blew it. When it came to protecting troops from IEDs, as Dannatt himself says, "It remains unsatisfactory that it is only now that we have closed with the issue ... We worked round the problem, we didn't actually confront the problem."

We also get from Dannatt some extraordinary claims about the Future Rapid Effects System (FRES). The man actually tells us that this had originally been envisaged in 2002 as a "short to medium term requirement" with the first vehicles to enter service in 2007.

Once again, Dannatt betrays his own ignorance. It may be difficult to understand that the professional head of the Army can be completely out of touch but, like politicians, senior officers also live in their "bubbles", completely divorced from the real world.

One of the reasons why the Israeli Army was so successful is that it was largely staffed by reserve officers, who had real jobs outside the Army. British Generals, with their Army mansions, their servants, chauffeur-driven limousines, and deferential staff, are dangerously insulated from reality. They really are terrifyingly out of touch.

Even then, if Dannatt really believed that FRES was going to be operational by 2007, then he is worse than ignorant. He displays a naivety of almost staggering proportions, neglecting as he does the last word of the acronym: "system".

FRES is what the US was calling FCS, the Future Combat System. It always was going to be complex and it was always much, much more than a vehicle replacement programme. It was to be a whole new way of fighting, part of the revolution in military affairs. It was to redefine military operations in the post-Cold War era.

Yet Dannatt claims he was "horrified" to learn in 2005 that the project had grown in cost and sophistication, with the delivery date put back to between 2015 and 2018. If he really expected otherwise and was at all surprised, then one really must wonder where he was ... to which monastery he had retired.

The thing is that even I was writing about FRES in 2004. Yesterday six years ago to the day, I wrote my first piece on the system, following up today, six years ago, with another piece. Don't take my word for it. Look at it, on the record. Six years ago, on 29 July 2004, I wrote:


... the government is preparing to sink around £6 billion into buying 900 vehicles, with an estimated budget for the total costs of ownership over the expected 30-year service life of almost £50 billion. That is a staggering £6.7 million average cost to buy each vehicle and an unbelievable life-time cost per vehicle – yes, each vehicle - of £55.5 million. To say that it would be cheaper to drive our troops into battle in a fleet of top-of-the-range Rolls-Royces hardly begins to illustrate the extravagance.

If I was writing that sort of thing then, how can Dannatt claim that he learned only a year later that, "the project had grown in cost and sophistication"? For that to be true, he must have been on another planet, or tucked away in that monastery.

If we did not know him better, we might think he is taking us for fools. In reality, the man has by now convinced himself that what he believes to be the truth is the truth. There are people like that. He is one of them. And the media, which has never followed FRES properly, nor understood it - any more than has the likes of Dannatt - allows him to get away with it. The journalists currently reporting on the issue have neither understanding nor history.

With Dannatt's evidence though, with Fulton, Figgures, and Jackson who also gave evidence yesterday, there can be no doubt that the MoD held off acquiring protected vehicles to protect the funding for FRES. There can also be no doubt that it took the politicians to push the military into acquiring the Mastiff.

Yet the journalists are completely misreading events. Both The Guardian and The Daily Mail are at it as well. They are inverting the truth with their narrative that the Army was warning ministers about vehicle deficiencies. But the Army was not. The minsters were kicking the Army, telling it to get protected vehicles ordered.

And, as a final twist, we learn from Fulton, that the military already had a replacement for the Snatch lined up - the Vector. In their minds, they did not need anything else when they already had something in mind. Left to themselves, Vector would have gone into Iraq as well as Afghanistan. That was the original plan. Even more would have died than actually did, had the Army been allowed to run the show.

The problem is, does anyone care – do they care enough to get it right, or is everyone seemingly content that a completely distorted view of history should prevail?