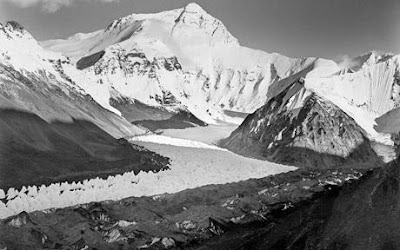 The climate sceptic world was somewhat entertained yesterday by the news from Jonathan Leake in The Sunday Times that the US government has suspended its funding of the University of East Anglia's climatic research unit (CRU), citing the scientific doubts raised by last November's emails "leak".

There is a lot more to this story than meets the eye, as the episode has provided a trigger to examine how much of the climate monitoring and analysis is being carried out, with the stress on the CRU work only being suspended. Something new and different may yet come out of this, which would make any triumphalism on the part of the cleptics a tad premature.

A similar caution might be extended to warmists getting over-excited about a brace of photographs taken of the Everest glaciers. One (above), is a 1921 photograph taken by George Mallory of the Rongbuk Glacier. In the distance is the northern slope of Mount Everest and the Tibet Autonomous Region. Then we see the same view (below), only the photograph is taken in 2007 by David Breashears of the Rongbuk Glacier. 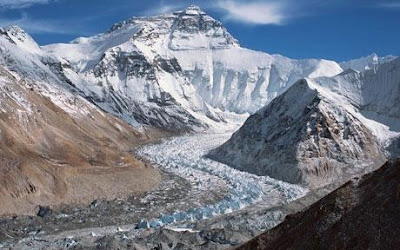 Like dogs to their vomit , this is one of the many issues to which the warmists keep returning, even though – as has carefully explained, the relevance of this one glacier, in the grander scheme of things, is absolutely nil.

Some glaciers expand, others retreat, for reasons we know not why. One thing about the Himalayan glaciers we do know is that they are not directly affected by global warming as these are high altitude glaciers, well above the permanent snow line and unaffected by small increases in temperature.

Glaciers, however, have that iconic character which means that the hard-core warmists cannot allow their status to be anything other than "under threat", and so we see yet again the spectre of retreating ice raised. There re-appearance, however, tells us nothing about climate but a great deal about the climate change industry. They are worried and while nothing very much is showing on the surface, as we all know, still glaciers run deep.