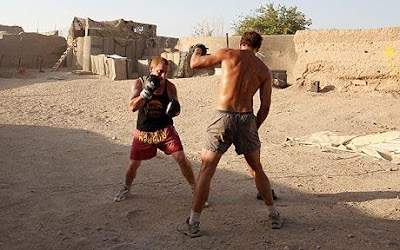 Readers might notice something familiar here. I'm actually quite pleased with the piece, and the paper has given it good exposure as the "editor's choice" ... even though there is a typo. I've written "Vixen" instead of "Viking".

I have to say though that it is incredibly difficult focusing on such widely divergent subjects as climate change and the Afghan War, drilling down to look at the issues behind the headlines. It would be nice, sometimes, just to concentrate on one issue ... the trouble is, which one?

Then I look at The Sunday Telegraph today and I'm not so bothered, now I see what the "professionals" are doing. In the print edition, we have a two-page picture feature on Sangin (see pic above), by defence correspondent Thomas Harding.

This is no reflection on Thomas - he's an ex-para and knows what he's doing, but he has been forced to put his name to Womans' Own soft-focus, human interest pap. It is a criminal waste of his skills and talent.

The shallowness is illustrated by a quote form Ross Wilson, the base's "avuncular 38-year-old colour sergeant". He says: "Sometimes, I feel like shouting at the local nationals that their lives would be so much better if they only got off the fence and picked a side. Then we could all get on with it, and get away." The best we get by way of strategic analysis.

What you have to do here is stand back and assess the piece in its entirety and ask to what extent it helps an intelligent, interested adult understand the complexity of the situation, and the decisions being made. Then compare it with my piece. Would you also like to tell me, incidentally, how "being there" has improved the reportage and analysis?

If the ST piece was one of an occasional "colour" articles, to provide background to more detailed analytical pieces – from a newspaper that once employed Basil Liddell-Hart - then I wouldn't have a problem. But this tends to be all we get these days. The paper has totally lost the plot.

It's funny that just yesterday I was complaining about The Guardian and excessive reliance on soft-focus, human interest stories. Here we go again.

Hats off to the Independent on Sunday then, as one of the last bastions of adulthood. You might not agree with its politics, but at least it treats its readers as grown-ups. And it also has a fine story on the Afghan security forces. I will have to review that separately, to do it justice, and I see few other stories today in the rest of the media about which I can say the same.

We really cannot afford this. We cannot afford the Fourth Estate to be hunkering down into a facile pastiche of a second childhood, frittering away its life energy on pap. There is a real world out there and it bites. We need to know about it.