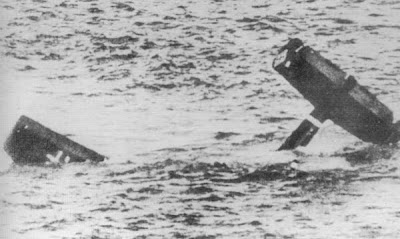 Today, exactly 70 years ago, the Battle of Britain officially started. The 10 July, though, was something of an arbitrary date, as Luftwaffe operations against the UK had been in progress for some time, matched by a British air offensive against Nazi-occupied Europe, which was to continue throughout the battle.

An example of this "other" air war was was the bombing mission on 5th July 1940 by Blenheim Mk IVs of No. 101 Squadron (type pictured below), during which its officer commanding, Wg Cdr J H Hargroves and his crew were lost. During the progress of the battle, 101 Sqn and others carried out multiple attacks on invasion barge concentrations in the French Channel ports and attacked enemy bomber airfields.

The 10 July, however, marked not only the first day of the Battle, its name already defined by prime minister Winston Churchill, but the first day of phase one. Depending on which history you follow, there may be up to five. This the number chosen by Derek Wood with Derek Dempster in their definitive account of the Battle, The Narrow Margin. Many of the details recorded here and in subsequent posts are taken from that account, published by Arrow Books (Revised edition, August 1969). 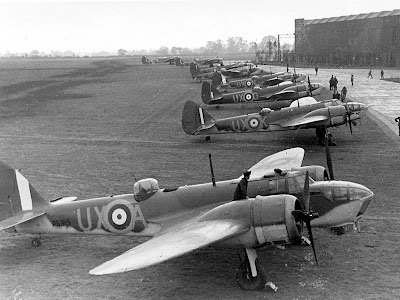 This phase, labelled Kanalkampf, was directed mainly at shipping in the Channel and the south and East coasts, although there was also considerable activity against Scotland. The phase (according to Wood and Dempster) was to last until 7 August, with the first day characterised by convoy raids off North Foreland and Dover. During the night, the east coast, home counties and western Scotland were attacked. The weather was showery in the southeast and Channel, with continuous rain elsewhere.

That local fight cost the Luftwaffe four fighters. Three Hurricanes were lost (type pictured below), one of them from 111 Squadron, which lost a wing after hitting a bomber. Only one small ship was sunk. A train near Newhaven was attacked – the driver was killed and the guard injured. 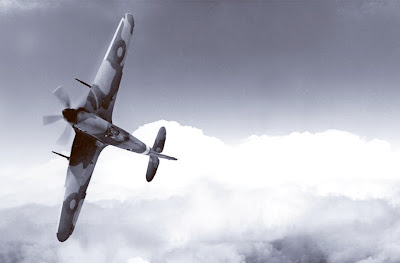 Elsewhere, there were signs of the fury to come. Seventy German bombers attacked Swansea and Falmouth. killing thirty people and damaging shipping, a power station and railways. The Royal Ordnance Factory at Pembury was hit and seventeen bombs fells on Martlesham. The day cost the Germans 13 aircraft against six British fighters lost.

But there were other operations. Two Blenheim IV's from 59 Sqn took off for a reconnaissance mission between Le Havre and Cherbourg. One of the aircraft (piloted by Pilot Officer Rex) crashed on return near Shropshire. The entire crew was lost.

And this was only the start of a battle which was to last over 100 days. It did not so much end in October as peter out as the Luftwaffe withdrew from daylight bombing and the winter set in, to become the Blitz. It was the battle of which Churchill declared: "Never in the field of human conflict was so much owed by so many to so few". He was not wrong.

Top pic: a Messerschmitt 110 taking a bath in the Channel, after an unfortunate encounter with the RAF.

Battle of Britain thread
Posted by Richard at 10:55