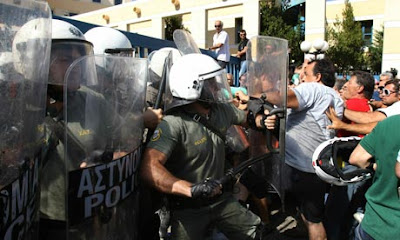 It might have disappeared from the notoriously parochial British media, but it is still there – Greece, that is. And their problems have not been resolved. In fact, they seem to be getting worse. The current round of troubles started a few days ago when the nation's lorry drivers announced their intention to go on indefinite strike today over plans to open up their sector to new licenses, opening up the transport business to new entrants.

Predicted shortages of fuel and goods, particularly on the Greek islands, have not been long in materialising and, at the height of the season, hundreds of thousands of holiday-makers look set to get caught up in the chaos, with even food and shortages of medicine threatened.

The government has no choice but to persevere – this strike being one of many as ministers try to implement fundamental economic reforms to meet the conditions imposed by the EU and IMF. Finance Minister George Papaconstantinou, has been struggling to meet the targets to secure a second payment of €9 billion by September.

With at least 100,000 tourists who had driven to Greece from neighbouring Bulgaria and Serbia now stranded, thousands have abandoning their cars as a result of fuel shortages. Officials taking the highly unusual step of beseeching visitors to stock up on fuel in Macedonia.

Premier George Papandreou set out emergency legislation late on Wednesday, threatening the drivers that unless they returned to work they would face stiff fines and their vehicles being requisitioned.

This is only the fourth time since the end of military rule in 1974 that such legislation has been invoked, but as yet no one is sure how the drivers will react to it. Chances are, the riot police are going to be busy, and one or two heads are going to get broken.

What is particularly vexing the government, though, is that the entire administrative structure seems to be breaking down. Under the emergency legislation, so-called mobilisation orders are supposed to have been issues, but most lorry drivers have yet to receive them.

The government is left without its big stick, seeking to negotiate a settlement, yet finding more and more sectors – one of the latest being the air traffic controllers – withdrawing their labour. Greece, it would appear, is not the place to be at the moment. But then it never was when there are a rather large number of Greeks baring rifts.