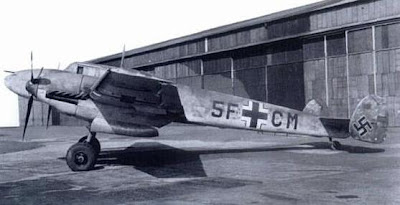 Depending on who you go to for your source, the weather was either fine and fair early, clouding over during the morning, or (from the MoD archive) "dull with occasional rain." The latter legend allowed for an official record of little action.

Weather, we are told officially, "hampered our fighters in their action against enemy air activity which was again on a reduced scale." Raids were plotted off the Scottish, East and South coasts, apparently searching for shipping. An attack was made on shipping off Dundee and trawlers were attacked off Beachy Head. One or two raids crossed the coast and bombs were dropped in Surrey, Kent, at Portland and in Ayrshire.

Read more on DAYS OF GLORY
Posted by Richard at 22:24