The dregs of the dregs 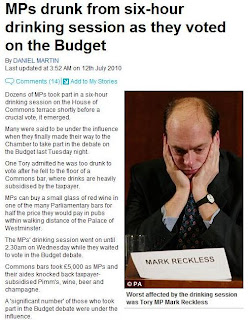 One is aware occasionally of rather unpleasant deposits on the footpath, despite the prevalence of dog-fouling laws – but that does not mean that we rush home to write about them.

In like manner, one becomes aware of the performance of certain MPs. The immediate impulse is very much the same – to ignore the unpleasantness and hope the rain washes it away ... except that it doesn't.

Thus, for our own record – late into the day – we must note The Daily Mail recording how "dozens of MPs took part in a six-hour drinking session on the House of Commons terrace shortly before a crucial vote" last Tuesday.

Many were said to be under the influence when they finally made their way to the Chamber to take part in the debate on the budget and one Tory admitted he had been too drunk to vote after he fell to the floor of a Commons bar, where drinks are heavily subsidised by the taxpayer.

In The Daily Telegraph we recently read of MPs exploiting new expenses rules by prolonging a debate past 1am in order to claim up to £130 each for staying in hotels, this not being unrelated with the episodes of drunkenness.

My immediate response is to rail at the stupidity of these people. Given all the recent events, the one thing you would be expecting of an MP is that he should be asking himself constantly of his own actions, "what would my constituents think – what would the general public think?" Given that they are now so obviously ashamed at their own behaviour, one wonders whether such morons are safe to be let out on their own, much less to represent us as MPs.

And now, looking at the "cuts", one can see the ripples spreading – the story having reached the Australian press and all points in between. So does it mark yet another step in our decline. Ask not for whom the bell tolls, it tolls for our cretinous MPs. This we do not deserve.