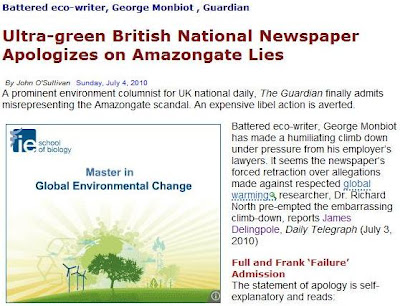 In the Canada Free Press today we find the following:

Mealy-mouthed Monbiot ("mealy-mouth:" unwilling to state facts simply and directly) has become a laughing stock not only among skeptics of the man-made global warming fraud, but also die-hards in his beloved tree-hugging fraternity.

Author John O'Sullivan also writes of an expensive libel action averted but that is not the case just yet. The Guardian, with my agreement, are treating my complaint in two parts.

The rather stiff apology from Mr Monbiot relates to the purely technical matter of his mistake, and his sneering comments related thereto, in not realising that my argument on "Amazongate" rested on two rather than one posts.

That leaves the second and rather more serious issue of what I allege to be defamation by Monbiot, and we have so far reached tentative agreement on a "right of reply". However, The Guardian is at the moment relying on a "fair comment" defence, arguing that this relieves Mr Monbiot of any responsibility to apologise.

On this, I find myself in the rather unusual position of instructing The Guardians senior lawyer on matters of basic law pertaining to the defence of fair comment. This passage is as useful as any:

If a defendant can prove that the defamatory statement is an expression of opinion on a matter of public interest and not a statement of fact, he or she can rely on the defence of fair comment. The courts have said that whenever a matter is such as to affect people at large, so that they may be legitimately interested in, or concerned at, what is going on or what may happen to them or to others, then it is a matter of public interest on which everyone is entitled to make fair comment.

The comment must be based on true facts which are either contained in the publication or are sufficiently referred to. It is for the defendant to prove that the underlying facts are true. If he or she is unable to do so, then the defence will fail.

Amongst other things, I am taking the view that Mr Monbiot's assertion that, "Now that the IPCC has been vindicated, its accusers, North first among them, are exposed for peddling inaccuracy, misrepresentation and falsehood", is meant as a statement of fact rather than opinion.

Either way, whether represented as opinion or fact, the assertion is neither true nor founded on fact. Nor could it be said that Monbiot's claim is free from malice, especially in view of his subsequent comments. But, on the substantive point, it is for Monbiot and The Guardian to prove that, as a matter of fact, I have been "exposed for peddling inaccuracy, misrepresentation and falsehood".

In this, they would have to demonstrate that the IPCC in respect of "Amazongate" has been "vindicated" and that the assertions made stem from that as a matter of course.

As it stands, The Guardian lawyer has other commitments for this week, so I have agreed to a hiatus. By the end of the week, however, we expect further developments with the WWF, and we will also be bearding the IPCC, putting the issue back in their court where it also belongs. I am also advised that there may be other very significant developments, which could have a substantial effect on the debate.

Thus, this matter is very far from over, and even when we have done here, there is the huge issue of REDD, which is just beginning to impinge on the public debate. One might suggest that if Mr Monbiot was truly an environmentalist, he might be more concerned with issues such as this, where the implications are enormous and disturbing.

But then, since when have the Greenies actually been interested in the environment, much less people?